This is a wonderful picture book about a boy named Chad who’s imaginary friend Pingo, doesn’t want to be forgotten as Chad gets older and insists on stilling around. 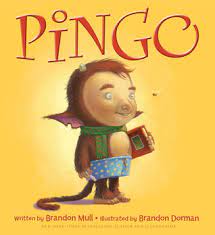 I give this book three stars (out of five). This is a children’s picture book, as a teengager I’m not the target demographic. But I still really love the concept this book introduces, even though the actual story doesn’t take it the way I would because it’s for kids.

The book’s story is about a kid named Chad who has an imaginary friend named Pingo, but as he gets older he doesn’t want to have an imaginary friend anymore. Pingo still wants to be Chad’s friend and tormets Chad throughout his teen years and stays around for the rest of his life.

When Chad is an old man he finally remembers Pingo and they become friends again and go on crazy adventures. It’s a good picture book, and I personally think lot’s of kids would love it. But I think the concept of an imaginary friend turning on you and becoming your ‘imaginary enemy’ could be terrifying and cool as a horror book, rather than just a short and simple children’s story. A whole bunch of things happen to the main character but no one else knows or believes that the imaginary friend is doing them.

Overall I think this is a great kids book, with a great plot and full of personality. The illustrations are also amazing!