This book tells a story of different lifestyles and beliefs, but it’s also the story of finding your way and learning to think for yourself. When the two main characters meet they are each forced to rethink how they live their lives compared to others. Libby in a “quiverfull” strict evangelical Christian household and Zo from an atheist and more progressive family. 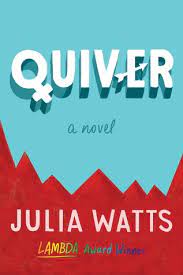 I give this book 4 stars (out of five). I really like this book, especially the ending (although I won’t spoil it). I love the concept and the topics it talks about, since it mainly focuses on the parallels between Libby and Zo’s (the two main characters) lives and their varying beliefs and the differences between their families.

Libby, short for Liberty, is the oldest of a fundamentalist Christian family. Her dad works, her mom cooks and takes care of/homeschool the kids, that sort of thing but more extreme. With six kids, extremely strict rules and different privileges for girls and boys. The girls only get to married off and be ‘good wives’ and ‘have as many children as God decides’ and boys can’t cry or show any emotion. Zo, is a young gender fluid teenager moving to a rural area for the first time from the city. Her family is atheist and they believe in gender equality, neutrality and acceptance.

So, when Zo’s family moves into the house next door to Libby it’s okay at first. Zo’s little brother Owen goes over into Libby’s yard to play with her little siblings and Zo and Libby quickly become friends. Libby is in her late teens and she’s worrying about her future, getting married (without really having a say in it) and having to stay with that guy forever and have as many kids as he or ’God’ decides. At the same time Zo is kind of depressed, she moved to get away from her ex girlfriend, public high school and the big city. But being almost completely cut off from ‘normal’ people her age is also hard for her. Honestly, being friends with Zo kind of confused Libby into questioning and worrying about more than just her future. She starts questioning her father, why he’s the only one in her family that can accurately interpret God’s will and her faith. She questions why she can’t do certain things just because she’s a girl and why her family is the way it is.

Their families’ varying beliefs, especially surrounding gender equality, are what kind of ruins things. Libby and Zo’s fathers get into a huge argument during a ‘Ice Cream social’ with both families and Libby’s dad forbids the kids from seeing Owen and Zo and makes them all fast for a week. However this fast really puts a strain on Libby’s mom who’s pregnant.

Anyway I don’t want to get too much farther into the plot because there’s so much to explain and I don’t want to ruin the book for you but again I love the ending and I think it’s extremely well written. Another thing I really like is the author, including Zo’s perspective. It’s really insightful, educational and cool to read what a gender fluid teenager might be thinking and feeling. I think the author also showed Libby’s character development and changes really well throughout the story. Overall I really enjoyed this book and what it said about fundamental Christianity and society.