Earth Hates Me By: Ruby Carp

Earth Hates Me By: Ruby Karp was published on October 3rd, 2017 when Ruby was only sixteen. This nonfiction book includes many personal stories and experiences as well as general advice for surviving your teen years, as it tackles many major issues and misunderstanding teenagers often face today. 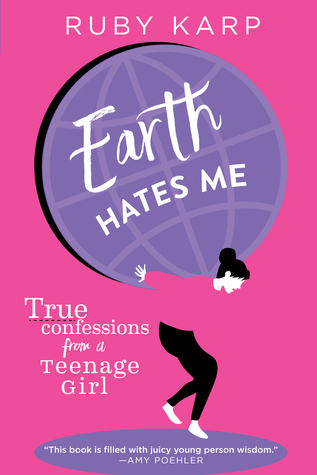 I give this book 4 stars (out of five). This is a really good and helpful book, ‘Advice for teens by a teen’ is a very interesting concept and something that I think should be published and explored more in many different forms of media.

Throughout the book I think Ruby covers lots of important areas and there are some specific instances where I would like to add to or comment on what she said. She is generally basing most of her writing here on her own personal experiences, but I actually think that’s good because that’s a lot more genuine than making assumptions about what other people have experienced. She also had a disclaimer that she was only speaking from her experience and things could’ve been different for anyone else with different backgrounds, sexualities, gender identities, etc. I definitely admire her confidence to be able to write down her embarrassing stories and private experiences and then publish them to the world. It can be very good to read things like this and realize that we aren’t always the only ones who go through certain things.

Overall I do wish that this book was longer and covered more things, and I think there was a good amount of both advice and personal stories supporting her reasoning but I think it would’ve been better with less stories and more general information and messages. But this might just be my personal preference.

To get a sense of what topics are covered here is the table of contents along with a few more specifics about what’s inside each chapter and what I thought about them.

The importance of laughter-This chapter is an introduction to the author and how the rest of the book is going to be, it highlights how much of a difference it can make to find the humour in life.

The social media trap -Discusses the dangers of social media, FOMO and how it can be used for good. I wish in this chapter there was more general internet safety information and less of a focus on the personal impact these things have had. For example, in addition to talking about the internet friends you made also talk about online communities or other positive impacts of social media.

The future is female: The new generation -This chapter is mainly about feminism and how it is looked down upon. I really liked this chapter and I thought the use of personal stories and experiences are very effective and powerful here. My only comment is that I think there is more to be said about women on women slut shaming, because it isn’t always about jealousy. There can be lots of hate amongst women and I think it’s a bit brash to assume that jealousy is the only cause of it although it definitely can be a component of it.

Young heartbreak (and why it’s gonna be okay) -This chapter is expectedly about relationships and what happens when they don’t work on, I personally wish this topic was handled a bit more generally with less of a focus on Ruby’s specific experiences. Although I do think they can be used as good examples and I really liked ‘Ruby’s five step plan for getting over someone who doesn’t deserve your excellence’.

The pressure is on -This chapter focuses on all the various things teenagers often feel pressured about, overall I think it was pretty well written but I do wish there was more about feeling pressured to look/act a certain way to fit in. But everything else that was included had very good points as well and she did a great job of justifying how teen’s feel (hopefully even in the eyes of adults).

Earth hates me and adults don’t believe it -This chapter mainly talks about all the things that can and do go wrong in life (so basically everything), again I wish this was less personal and more general but even despite that I still think it was good and would be helpful to readers.

Almost’s -This is about all the things that almost happened, overall I liked lots of the things covered in this section. I just wish there was more of a positive element, it very much talked about ‘Almosts’ in a negative light but I think there is something to be said for being close to achieving something, even if it doesn’t go the way you wanted or planned.

Why our friends are our soulmates (and sometimes not) -This chapter is all about friendships at every age and how to navigate the world of socializing, again I would’ve liked it more if it was slightly more general but lots of the stories and examples were used well to explain different points.

Family Matters -This mainly focuses on family relationships and difficulties, specifically about her and her relationship with her mother. I understand that Ruby can’t really speak about things she hasn’t experienced but I would’ve liked to see a more general note about different types of families, situations and relationships. So even something about relationships besides just with your parents, would’ve also been helpful.

What will you be? -This is a conclusion section talking about your future and what happens after your teen years and high school.

The main thing I didn’t like about this book was that there were lots of pop culture references that can either be very effective or very confusing depending on who is reading, generally I wish there were less of them. Especially when they’re mainly used to connect with the reader and not the subject matter, because it’s better in case some readers don’t understand. I also want it to be clear that I couldn’t understand not because I don’t use the internet or I’ve been living under a rock, I’m just actually too young to understand lots of the references even though I’m part of the target audience; teenagers! Also I think a lot of these references were supposed to be seen as comedy which is hard when only a certain demographic will understand the jokes.

Besides that I really enjoyed this book and I love the concept of teenagers helping other teenagers, especially by sharing stories, experiences and advice. I actually picked this up and decided to read it because it is the type of thing I am interested in writing myself and I think that even if lots of people wrote books similar to this, everyone’s would be different enough to still be worth reading. And it could be quite interesting to see how things compare in different places, times and for different people. Anyways, I would recommend this to teens looking for some guidance but if you want more help than entertainment this might not be what you’re looking for.