This part of the Five Kingdoms story explores a new kingdom, Elloweer in search of the lost princess Honor. Lots of things are different here, even the shaping is called Enchanting and its all about illusions.

Cole and his friends travel far and wide to try and do what’s right to save the kingdom and the princess’s but how will they regain Honor’s shaping power when they aren’t even sure where it is? 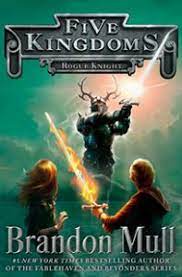 I give this book five stars (out of five). Another great book filled with Cole’s incredible adventures in the Outskirts, except the majority of this book takes place in Elloweer (the name reminds me of Delloweer and Cauliflower, just thought I’d share) while the first book was in Sambria. Traveling to a different kingdom means a new type of shaping, the enchanting in Elloweer allows people to shape amazingly, realistic illusions, seeming and figments.

Still with his friends Cole is going to Elloweer to help Mira (the princess) find her other sister Honor. The High Shaper or King of the Outskirts faked his daughter’s deaths and used something called shapecraft to steal their shaping powers. Shapecraft is the shaping of shaping power and abilities, transferring powers from people to other people or making the power run wild without a host body.

Again I can’t go into too much detail about this book, but I will do my best to summarize it because I really enjoyed this story. In Elloweer Cole and his friends get robbed by the Rogue Knight, a giant knight quickly gaining political power. Cole is able to use his shaping power for the first time, but Mira gets kidnapped by the rogue knight.

Along the way is able to Cole find and rescue his best friend Dalton from Earth, and together they all go visit Trillian an all powerful evil being that was trapped in a small area of Elloweer decades ago by the Outskirts most powerful shapers.

Cole, Mira and Jace go through intense dangerous trials to free Honor from the Trillian. Afterwards they visit the grand shaper of Elloweer and get magical masks that can turn them into different animals of beings (like knights or various animal forms). Teaming up with the Rogue Knight they fight another manifestation of shaping power called Morgassa, she has the power to turn everyone she touches into mind controlled slaves.

Cole and his friends use shaping to avoid that and eventually win the battle, because Cole suddenly became aware of his power and used it to make shaped weapons from Sambria work in Elloweer.

However before Morgassa was defeated she used shapecraft on both Cole and the grand shaper, it blocks them from using their power. Turns out Morgassa wasn’t Honor’s shaping power as everyone had expected, it was actually Brady’s and Honor’s shaping power was given to the Rogue Knight himself. After some discussion the Rogue Knight gave up the power and they parted ways.

I absolutely adore this book and the entire series as a whole. Although it doesn’t play a huge role in the majority of this book I also really loved Cole’s individual story, he is the main character but lots of things in this book are entirely his own story. But things like his undying motivation to find his friends and his determination to get home and use his shaping power to the best of his ability is so cool to read. Being able to see his shaping power grow throughout the story along with all the other things happening is really one of the best parts.

I also like it because at first Cole feels really lost and out of place in the Outskirts but as he meets more people and travels around the Kingdoms he discovers more than just facts and friends, he also explores himself and discovers who he is. Which is very interesting and fun to read as well. I find that because Cole also has unique and distinctive shaping powers, which helps make him seem special compared to other characters.

Even though lot’s of things happen throughout this book, it never feels rushed and the pacing stays consistent. I really enjoyed reading it even multiple times, my favourite things about this series so far are the worldbuilding for the Outskirts and all the well written, engaging characters. A few of my favourites from this book are Cole, Twitch, Mira, Minimus, Brady and Trillian. Even the background characters have depth and believable motivations.