This is inspiringly tragic story of Sadie, following her as she runs away to try and find her sister’s killer. 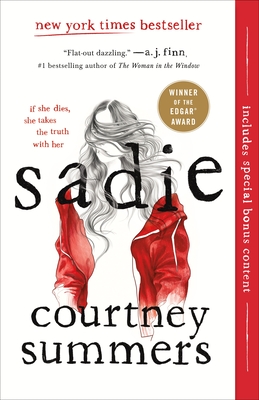 I give this book 4 stars (out of five) mainly just because I had slightly higher expectations. I picked up this book because I know it’s award winning and I’ve seen lots of people talking about it. I wanted to read it so I could understand what people were talking about and figure out if it’s worth the hype or not. I definitely think it’s a very good story but I wouldn’t have necessarily expected it to be a bestseller if I didn’t already know it is. It was good, but I think I’ve definitely read books at the same level or even better that weren’t as well known or successful.

Sadie goes missing shortly after her little sister Mattie is murdered, she left to try and find her sister’s killer. She’s following all the clues that could lead her to him and going around asking people for help, by saying she’s his daughter even though she really isn’t but he lived with them for a while when he was her mom’s boyfriend.

Eventually she finds a vacant motel room that belonged to him and there she finds his fake IDs and patches he used to show the young girls he’d abused/raped, and Sadie knew he was the killer because she was one of these girls. From there she follows him to a new house, where she encounters a little girl, Sadie tries to lure her away because she intends on confronting the man and doesn’t want her to get hurt.

[Spoiler warning, skip the rest of the summary to avoid them. (break in paragraphs)]

We know that he later dies and Sadie’s point of view suddenly cuts off so it’s safe to assume that she also either died there, along the way or is still mysteriously missing because we don’t get to see anymore from her point of view after that.

This story is also being told from another perspective through a podcast called The Girls, run by a reporter who follows Sadie’s trail and tells her story.

Initially I was a bit confused because I didn’t realize the extent of the time difference between the two different perspectives, but once I understood it was easier to follow. At first I thought it was weird that they were airing The Girls podcast while Sadie was still out there, but now I see that it’s because they no longer know if she’s still missing or dead and they had permission from  other family members.

The two different perspectives were really interesting and a very smart way of filling the reader’s in on information we couldn’t get from Sadie’s point of view. But sometimes I think this almost was a fault in the story, because lots of Sadie’s perspective leads up to certain scenes that aren’t shown in her point of view and instead are only later explained through the podcast, which at least to me was annoying because I didn’t get to read the scenes I really wanted to see from Sadie’s side.

I really liked the detail and characterization of having a protagonist with a stutter and showing how that affects her constantly and made her easier to track. This detail contributes to the world building for the story and I liked how it made Sadie more unique as well as was able to shine light on some widespread ableist behaviours and beliefs.

Specifically with that, I liked that she doesn’t stutter when she’s alone and the specific scene when she’s searching for Mattie and is waiting to stutter so she knows she isn’t alone. This is not only a really interesting detail but also an interesting and original plot point. Sadie also had vivid flashbacks throughout the story which could clearly show the trauma and terrible experiences she faced and how they motivated her actions in the present.

I absolutely loved that having a stutter and not being heterosexual don’t define her character at all and are just aspects of the person the story follows. There were also other LGBTQ+ characters included throughout and it isn’t commented on or anything, which I love to see.

[Spoiler warning, skip the rest of the review to avoid them.]

Sadie’s story is very compelling, especially because of the later plot twist of Claire (their mother) being very close the entire time although the characters believed her to be far away and Sadie actually being the one who sent the letter to try and help Mattie. But this was also the thing that tore them apart. It’s a very interesting story and I liked being able to see people following Sadie’s trail and trying to understand all the clues she left behind.

I think the saddest part of this entire story is that her remaining family and everyone invested in this story won’t ever get to know exactly what Sadie did and what her intentions were. They know some of the story but not all of it and it’s sad that they’ll never fully understand what she did and what happened to her.

Overall I enjoyed reading this story but I also was a little bit disappointed specifically with the ending because there were certain things I wanted to see or have explained that were left more open ended. This is arguably a sadder ending compared to if the author had just spelled out exactly what happened and didn’t leave it to be a mystery.