“What are the kids up to these days?”

Scream Site is the newest thing, a site where anyone can upload short horror films and gain popularity. But when girls start disappearing and then appearing in videos that look too real, Sabrina is convinced there’s more to the story than what’s on the surface. 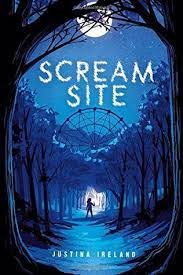 I give this book 1.5 stars (out of five). First of all, I have to disclose that this isn’t an 100% official review because I didn’t fully read this entire book. I read some of this but I honestly skimmed most of it. I have a full understanding of the plot but I didn’t read all the details and build up to the final reveal. But I really want to share my thoughts and opinions on this anyway.

In this review I’ve blended my commentary and a summary of the plot more than in most others.

My first problem with this book is that it feels like it has every cliché, honestly I’m surprised there wasn’t a love interest. It’s the story of a high schooler investigating a case that should definitely be solved by professionals, but nobody listens to her so she’s forced to take matters into her own hands.

That’s the entire story, that’s it. I’ll give this book props because the premise of a website for amateur horror films coinciding with disappearances is actually really interesting, unique and scary. I also liked that there was a personal element with Sabrina’s sister, Faith.

Most of the story felt like filler, was boring or didn’t contain anything that mattered in the end. I don’t think I would’ve finished reading this if I didn’t decide to skim parts of it because it’s really slow paced and normally that doesn’t bother me but in this specific book, it was really boring.

[Spoiler Warning, skip to the last paragraph to avoid them.]

The final reveal is that all the girls who’ve been disappearing, now including Faith, are not actually being physically hurt but are instead being forced to work for the owner of the abandoned Amusement Park and film videos for Scream Site. It was supposed to be an acting job, but it also involves disappearing and not leaving the job site. Sabrina, with help from her English teacher of all people, rescues the girls and stops the whole thing.

I’ll also give points for having an interesting twist and subverting expectations, no one was actually in imminent danger but they were still stuck in a bad position. Sabrina wasn’t wrong about them needing help but she also wasn’t right about the girls being forcefully abducted or the videos being real.

There was also one moment in between pages where it seems like Sabrina’s English teacher was in on it the entire time and that would’ve been such a good twist that I’m disappointed it isn’t what actually happened.

Another problem I had with this was that I’ve noticed that in books like this the main characters feel very similar. They’re the smart, goody-two-shoes girls who are always focused on their work even more than other important things in their lives. They are stupid when it’s convenient, don’t acknowledge danger when they’re personally threatened, never tell adults for some reason and then confront the antagonist by themselves.

This is really annoying because at least in this case Sabrina tells her uncle all her suspicions during her investigation but he doesn’t take her seriously, so she just doesn’t tell him when her sister disappeared? I don’t understand that logic, those are very clearly two extremely different situations and I think he would definitely take her seriously since Faith was missing.

I think she’s just stupid because if you’re first reaction when you’re sure that your sister just got kidnapped isn’t to call the police, and is instead to ride your bike to where you think she is; you’re stupid. I’m adding this to the list of books I hate because the main character is supposed to be smart but makes terrible decisions.

Seriously there shouldn’t be this many similarities in books, it might just be because of when I read them but this feels just like A Good Girl’s Guide to Murder but with a family subplot instead of a romantic one. And I don’t think anyone can change my mind on that. I’m just sad because this is another book that seemed promising but let me down.