For forty years there has been an alliance between the dragons and the humans of Goredd. But as the anniversary of the treaty draws nearer, tensions are high, Seraphina joins the court just as a member of the royal family is murdered. She is an unusually gifted musician and she has a dark secret of her own, one that could kill her if discovered. 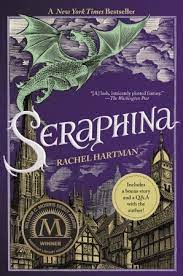 I give this book five stars. I really enjoyed reading this book, it was beautifully written and was so interesting to read. I really like how the book throws you into the world of the story, it doesn’t explain everything right away but I think if it did do that it would kind of ruin the immersion of the story. It’s part of what makes the story good and you, as a reader, can figure out what everything means and that makes it such a good story.

The story is set in a medieval fantasy setting, for forty years there has been an alliance between the dragons and the humans of Goredd. But as the anniversary of the treaty draws nearer, tensions are high, Seraphina joins the court just as a member of the royal family is murdered. She is an unusually gifted musician and she has a dark secret of her own, one that could kill her if discovered. Seraphina is half-dragon and has reason to fear both sides of the brewing conflict.

Seraphina gets roped into an investigation, working with the particularly observant Prince Lucian Kiggs. They uncover and piece together hints of a hidden plot to destroy the peace, but as things start fitting together Seraphina struggles to hide her secret and her growing feelings for Prince Kiggs.

I think Seraphina’s secret is a little bit too predictable just by reading the back of the book I could guess what it is, but I also think that I might have ended up reading this if I couldn’t have guessed that she’s half-dragon. So I think even though it’s a little predictable it still isn’t overly predictable and still enjoyable because even if you can guess her secret you couldn’t guess all the ways it affects her.

I fell in love with all the characters, they’re very well written and believable. I was very emotionally invested in the story, at many different times in emotional scenes between the characters I literally cried.

[Spoiler warning for this paragraph, skip it to avoid them.]

Since the ending was so emotional for the characters and it was also for me too. However I was disappointed with the ending, only because Seraphina and Kiggs are in love but they can’t be together because of the war. I know this is the only reasonable thing they could do but it’s so unsatisfying since most of the main romantic storyline is about them coming together.

Another thing that I think is absolutely amazing about this book is that Rachel Hartman, wrote the story with all the clues, signs and foreshadowing for some of the main reveals there from the beginning but the characters never fully saw them for what they are, even if they were close while trying to solve the mystery.

This book left me full of anticipation and curiosity, I really wanted to know what happens next! After finishing it I immediately rushed to find the sequel and to try to find a copy of Seraphina for a good price, because this book was really impactful to me and is one of my favourites.

Overall I really recommend this book to anyone who likes fantasy books, with amazing compelling characters and a perfect plot. I recommend this book to anyone who trusts my opinion. In the rest of this series there’s a sequel called, Shadow Scale and a prequel called The Audition! Currently I haven’t read these yet but they’re on my reading list and I will post reviews of them soon.