In this astonishing conclusion to the Chemical Garden Trilogy, Rhine’s time is running out and she’s still in need of answers. After being stuck with Vaughn and forced to endure his experiments Rhine finds unlikely refuge in his brother Reed’s place.

She stays there and tries to uncover the truth, but she finds her brother is caught up in an underground resistance. Rhine is determined to find him before he does anything dangerous, but what Rhine learns changes everything she thought she knew. 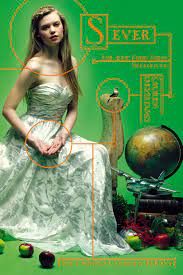 I give this book four stars (out of five). I absolutely loved this book and it’s a great conclusion to the Chemical Garden trilogy. I’m going to do a really short summary because so much happens in this book and it’s the last book in a series so lots of it isn’t going to make sense if you haven’t read the other books.

It starts with Rhine going to stay with Linden’s uncle Reed. But when Cecily and Linden stay over for the night trying to escape Vaughn, Cecily miscarries and nearly dies. Being followed by Vaugh constantly, Rhine continues her search for her brother. But when she finally finds him he’s already been corrupted by Vaugh.

They fly to Hawaii, a place no one knows exists where no one has the virus and live however long they can naturally. While there Vaugh performs more experiments on both Rhine and Rowan (her twin brother). They read their parent’s old notes and found out that they were only experiments to try and find a cure.

Vaugh wants to finish the experiment and cure them, but only for the science so he can use it on Linden though. After Vaugh takes them back to the mansion he needs Rhine to go get Linden, Cecily and Bowen back (and Linden took back or undid his marriage with Rhine). On the way back they stop at Reed’s place to pick up Bowen, when they’re there the plane finally starts working and they all go for a fly. But Vaugh shows up and the plane crashes, killing Linden and devastating Vaugh. The next day Cecily kills Vaugh, they make it look like an accident, tell Reed and let him take over the mansion. They also convince people from the government to include the other characters that haven’t been cured yet in the experiment as later volunteers. They had a happy ending, Rhine living to 21 and happy with Rowan, Cecily, Gabriel and Bowen.

I totally loved this book! I thought it was great although the entire series is pretty sad and lots of good characters die, besides that everything is great. I also found the relationship between Rhine and Linden to be really interesting, especially as it developed and changed. All the characters’ names were also very unique and interesting, compared to many other novels.