It started out as a normal day as Cole Randolph and his friends Jenna and Dalton go to a haunted house for Halloween. But it was anything but normal when they are kidnapped and taken to a strange in between world called the Outskirts.

But as the magic known as Shaping starts to unravel Cole must team up with his newfound friends and an interesting girl named Mira, to save his friends and find a way back home before he is forgotten. 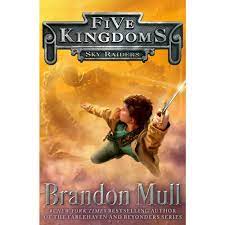 I give this book five stars (out of five). It’s the well written tale of Cole Randolph’s adventures, after being kidnapped on Halloween with many other kids from Earth and taken to a strange land in between everything called the Outskirts. It’s also important to note that Cole technically wasn’t one of the children taken, but he unknowingly followed the kidnappers into the Outskirts to try and save his friends.

After the children are taken their families and all the people back home forget they ever existed, so the missing people are never reported or investigated. Once you come to the Outskirts it’s very difficult to leave, but that’s what Cole is determined to do as soon as he finds his friends Jenna and Dalton, who he followed in.

The Outskirts is a very weird place and there are five different kingdoms there, this is also why there’s five books in this series as each installment explores a new one. This book takes place in Sambria and follows Cole and his magical adventures. In the Outskirts there’s a type of ability called Shaping, it’s almost like magic but it takes a bit more skill. Not everyone has shaping power and it’s kind of like a gift, but the corrupt King is trying to control others and be the most powerful shaper. There’s also a unique type of shaping in each different kingdom, which brings new opportunities, stories, characters and adventures. This also means that shapers with one type of power will be weaker or incapable in other kingdoms, and things that have been shaped in one kingdom won’t typically work in another.

In this book Cole does many, many cool things, here is a short summary of all the main things that happen. During Cole’s first few weeks in the Outskirts he was bought by the Sky Raiders, scouting through sky castles filled with Scoriopedes and Cyclops (very strong monsters).

Through a complicated series of events he escapes the Sky Raiders (he was a slave and his life was on the line) through the Eastern Cloudwall, a wall void that people usually can’t survive. With his friends, fellow sky raider slaves and princess in hiding who everyone thought was dead. There he meets the Grand Shaper of Sambria, Declan who greatly helps them along their journey, informing them and giving them purpose.

The girl is named Mira and she is very important to the plot, since her and her sisters have been scattered across the kingdoms and were robbed of their shaping powers. Cole’s other friends are Jace and Twitch, both unique characters you will come to love over the course of the series.

He travels through a silent forest, a Dreamland created by a kid with insane shaping abilities (similar to magic) and fights a monster made of Mira’s stolen shaping power. By the end they discover that there’s an order of shapers working with the High King to conquer the Five Kingdoms. It’s a long story and there’s a lot of important details, so unfortunately that’s the best summary I can give you. I wish I could fully explain all the small things that make this story a work of genius.

Despite that I really loved this book and the rest of the series. I recommend you read this book if the summary sounded interesting, there’s also four other books in this series, so if you like it there’s a lot more to this story. I really can not even fully express how much I love this series, especially this book and the main character Cole. I found it very easy to relate to him and I think he can be quite funny at times, his character was probably my favourite thing about the entire series besides the incredible world building.

I first read this when I was twelve years old but since then I have reread the entire series multiple times and I still love it. In fact, even now that I am older I still want to reread these again, that’s how much I adore this series and it’s many characters and quirks.