So B. It By: Sarah Weeks

Heidi doesn’t know when her birthday is or anything about her family, besides her mother who is mentally disabled and can’t communicate much. To learn more about her family and who is she Heidi must travel nearly across the country alone. This coming-of-age story will take you along the journey as Heidi starts finally figuring things out. 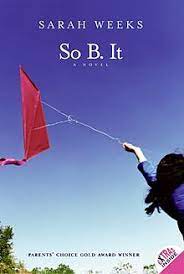 I give this book four stars (out of five). It was very well written and compelling. It centers around Heidi who lives with her Mama and her neighbor Bernadette. Her mom is mentally disabled and can’t talk well, she only has about 23 phrases in her vocabulary. Bernadette has helped take care of both of them since Heidi was very little. Heidi also has amazing luck, she can do things like win tons of money from slot machines, figure out the exact number of jelly beans in a jar and predict ‘heads or tails’ accurately ten times in a row (when someone flips a coin).

The main story is when Heidi starts wondering who her family is, besides her mom (who calls herself So be it and doesn’t know her real name). Although through some complicated circumstances Bernadette can’t leave the house and her Mama can’t either, but Heidi is determined to travel to New York to learn about her family. She has to make the journey by herself, which is three and a half days by bus in both directions. All along the way Heidi learns lots about herself, her family and her Mama’s history.

The ending is incredibly emotional and very well written, although I won’t spoil it. This book is mainly directed to a slightly younger audience, but it’s still a great story, with good characters and a great yet sad ending. There’s also a movie based off this book which is also probably good, but I haven’t watched it yet.