This documents the 45 days Jeff spends in a youth’s psychiatric ward after a suicide attempt. With witty humour and outlandish sarcasm Jeff navigates life at the ward while coming to terms with what happened. The main mystery is that no one knows why he did it, but rather than that this story focuses more on Jeff’s character development throughout his time there. 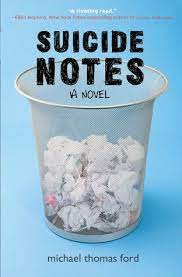 I give this book 3.5 stars (out of five), because this book was very interesting, funny and engaging but it also was not what I expected at all. Immediately from the first page I was blown away by the main character’s intense sarcasm and hilarious sense of humour. Although I did really like the story I do have a bit of criticism as well. This review sort of combines feedback and summary, by putting them together so I might summarize part of the story and then talk about why it’s good/bad throughout the review.

This book tells the story of our main character Jeff, a young fourteen year old boy who ends up in a psychiatric ward after a failed suicide attempt. What we read is his documentation of the 45 days he spends there, and throughout the course of the story the readers and Jeff’s doctors alike are trying to figure out why he tried to kill himself. And the answer is probably not what you would expect.

Throughout most of the book Jeff is resentful, he didn’t want to be saved and he’s determined to get out of the ward. He’s sure that there was a mistake and he’s trapped with a whole bunch of crazy people, while he’s ‘normal’ and ‘fine’ or at least he thinks he is. As he gets used to the place and all the different people coming in and out of the ward, he gets more accustomed to the place and eventually but very reluctantly stops being quite as sarcastic and opens up a bit.

First to Sadie, a girl who tried to drown herself and is also there for a while. Sadie is a very interesting character, she’s definitely the one Jeff is closest with at the ward. They bonded over watching tv with it muted and making up conversations between characters, they became friends because they were very similar and she’s the one who helped Jeff get used to the ward.

[Slight Spoiler warning, skip to ‘My opinions and comments’ to avoid major spoilers.]

I think the main important events are Jeff’s parents and family visiting a few times, Rankin (another guy at the ward) lowkey sexually assaulting Jeff, Sadie committing suicide and Jeff finally opening up about why he did what he did.

I honestly wish the whole sexual assault part wasn’t included because at a certain point in the middle of the book there was suddenly a whole bunch of sexually explicit scenes that I was not excepting until I was reading them. Having those types of scenes is okay but in this case they came out of nowhere and some of them were without consent. Like in the final scene where Rankin and Jeff got caught together, Jeff was sleeping when Rankin started touching him and couldn’t get him to stop even after telling him not to. The lines were kind of blurred before because Jeff never straight up told him to stop but he also didn’t consent, which is why up until the last time it wasn’t too bad. But the last time Rankin did things explicitly without any consent when Jeff was asleep, which is not okay at all under any circumstances.

Jeff finds out about Sadie when he hears screaming in the middle of the night, it was Martha because she was the one who found her dead. Sadie overdosed on some of the drugs they had at the facility but nobody really knows how she got them. She didn’t say much of anything at all in her suicide note and didn’t give much of an explanation besides that it was her “time to go.” Jeff is really upset by her death because she was his closest friend and suddenly she was just gone.

Now the most important part of this book was Jeff’s reason for attempting suicide, the entire time we (the readers) are lead to believe that it’s something to do with his best friend Allie and her boyfriend Burke. It seems like it’s building up to the reveal that Jeff was in love with Allie but then she got a boyfriend, changed and stopped spending time with him. So Jeff got jealous and depressed and then tried to off himself. But that was not the case at all.

It was really smart to mislead the readers in this way, because it does technically have to do with Allie and Burke but this assumption wrongly assumed who Jeff liked. The main plot twist is that Jeff didn’t like Allie; he liked Burke, and he had long before they started dating but once they got together Jeff couldn’t see them together because he got sad and jealous. Then one day earlier in winter break Jeff, Allie and Burke were all at the same party and Jeff got very drunk and bumped into Burke alone in the bathroom. In that state Jeff accidentally confessed and tried to kiss him, but he was straight and very loyal to Allie.

Since that night Allie hadn’t talked to him except once on Christmas when Jeff called, it doesn’t really matter that he’s gay, but it does matter that he tried to kiss her boyfriend. In the end Jeff attempted suicide on New Years while watching the countdown because he lost his best friend and also because being gay makes his life harder (in a roundabout way).

After Jeff felt very sure that he is gay (at the ward) he finally opened up his doctor and explained everything. And then they worked together to help him come out to his family. It takes them a few hours of talking but his parents eventually warm up to the idea and don’t assume that Jeff is just confused and too young to know about that. And in the end Jeff leaves the ward and his return home looks good after the journey he went through while there.

My opinions and comments (with a few spoilers throughout):

[Major spoilers in the following paragraph]

I found the title very interesting because when I just looked at the title I thought it would be referring to Jeff’s own suicide note, but he never wrote a note which is why everyone has to ask him why. And the only person who did write a suicide note was Sadie towards the end of the story. But this entire book acts as a form of suicide note for Jeff, because by the end we find out why he did what he did and what his thought process was. It’s a longer way of explaining it but it does that same thing a note would. And this way also lets us see his perspective and thoughts after the attempt, and we can see his thoughts go from wishing no one had saved him to being glad his parents found him.

Jeff is a really interesting character, he retains out loud that he didn’t actually want to die, he just did something stupid. While inside it’s clear that his actions were intentional. Jeff had a pretty interesting take on his scars (he tried to kill himself by slitting his wrists so he has big and noticeable scars), but he doesn’t want them to go away and he isn’t scared of them. He wants them to stay so he can remember the pain and know not to do anything like that again.

One of the things that really stood out about this book was Jeff’s sense of humour, with things like calling his doctor Cat Poop for majority of the book, pretending to be possessed by the Sugar Plum fairy and many other hilarious sarcastic lines that I loved.

There was a very interesting part when they were doing an exercise where everyone had to say one thing they would change about themselves if they could, and Jeff was the only one who said he’d get rid of something (his fear of heights). But in reality he says that he wants a tail because he thinks it would be cool.

My main criticism is that this book is from the point of view of Jeff so he says and thinks some things that aren’t accurate or correct and I think there should’ve been more clarification around that. Some examples of this is when Jeff first gets to the wards and he refers to everyone as crazy constantly, he nearly uses the f-slur against gay people (specifically Rankin), when Jeff alleges that someone can’t have an eating disorder if they aren’t skinny and how the entire issue of consent was handled.

There should’ve been more information countering these things, because eating disorders don’t just make people skinny, slurs are not okay to use and people with mental health issues are not crazy. I wish that Jeff had clearly stated that he didn’t give Rankin consent because then it is clearly not okay at all.

The other similar problem is that the information for Suicide hotlines and similar ways to get help are at the back of the book, so people will have to read the entire story or think to flip to the back to find them. I personally think those protections should’ve been at the front of the book instead.

Overall I enjoyed this book, mainly because it’s very, very funny and I liked the main character. I also really appreciated the plot twist and how everyone assumed that Jeff was in love with Allie and then the reveal turned that heteronormativity on its head.