‘Summer Bird Blue’ is the tragically beautiful story of Rumi Seto. She’s not sure she can find the answers to everything. And when her sister and best friend Lea, suddenly dies in a car crash, she only finds herself lost with more and more questions but hardly any answers. Guided by music and with a few people to help her along the way, Rumi spends the summer in Hawaii and tries to find herself and her way forward. 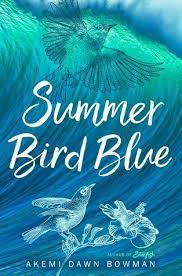 I give this book 4.5 stars (out of five). This book is very sad and emotional, so just a warning you might cry or feel very sad while reading. The main character is a girl named Rumi Seto, she’s best friends with her younger sister Lea and she loves music. Even though she worries a lot she also speaks her mind and in the moment can be rude or opinionated. She’s jealous of Lea because she gets all of their mother’s attention and love but they still get along all right besides their fights.

Lea and Rumi love to play music together, they can both play guitar, ukulele and sing and Rumi also plays the piano. They love to write songs together and play a certain game where they take turns saying the first words that come into their heads and make whatever they get the name of the song. Then they try to make a good song out of it.

It’s a normal day and Rumi, Lea and their mom are driving, in the backseat Rumi and Lea are playing the game and they just got the three words “Summer Bird Blue” and are just starting the lyrics when they suddenly get into a car crash. Lea is seriously injured and dies but Rumi and their mother are fine. Rumi gets sent to Hawaii for the summer with a distant aunt while her Mother tries to deal with the grief of losing her daughter.

Rumi isn’t sad, she’s angry at basically everyone and everything. But she’s very mad at her mom, for leaving her far from home and alone right after losing her best friend and only sister. She feels as though it’s her fault Lea died and she should’ve been the one who died instead. Lea was always the favourite and she thinks that even after Lea died her mom still chooses her even though she still has one living daughter left.

The story basically shows her summer, how she copes with her loss and her relationship with her mother. It’s an emotional journey and a very good story. Throughout the summer Rumi spends lots of time trying to finish “Summer bird Blue” the song they started before the crash, but at first music hurts her because it only reminds her of Lea and how she isn’t there.

[Spoiler warning for the next paragraph]

By the end she finishes and performs the song and it’s beautiful, this shows her growth as a person and signifies that she’s grown and moved on while still being able to remember and honour her sister, she’s no longer angry and she can be happy again.

Another thing I really loved is throughout the book they have many memory scenes where Rumi remembers something and it completely shows what’s going on in her head. Overall I really loved reading this book, I think it’s a really good story despite being really sad and I’m glad a YA novel can start to explain the process of grieving and loss.