The Burning By: Kathryn Lasky (Guardians of Ga’Hoole #6)

This is the sixth book in the Guardians of Ga’Hoole series, Soren and his band of skilled friends are traveling to the Northern Kingdoms to try and get information and help from the owls and other creatures there. Coming together in an intense battle against the Pure Ones. 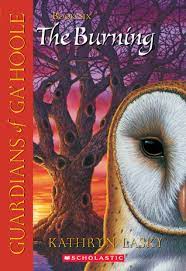 Overall I give this book three stars (out of five). This book was yet another good continuation in this series. My main comment is that I wish this story wasn’t broken up into so many different short books, I honestly think it would’ve been better and easier to follow as less separate books.

This one centers around the main characters, the Chaw of Chaws, as they’re sent on a mission to the Northern Kingdoms to try to recruit owls and other creatures to help them in the ensuing war against Kludd and the Pure Ones.

The journey to the Northern Kingdoms is a bit rough since they’re flying into a place they’ve never been before and haven’t had a ton of time to prepare for it. Once they arrive there the group splits up and goes to different places to do different things. Ruby and Martin are sent to meet the Kielian Snake Hoke of Hock, to try and possibly recruit snakes to fight with owls again and learn more about how snakes and owls worked together in the past.

Otulissa and Gylfie travel to the Glauxian Brothers Retreat’s Library similar to the Great Tree, this is a library where owls go to learn more and retreat away from the outside world, to learn about war strategy and retrieve a copy of the important book that was destroyed by Dewlap in previous books. Finally Digger, Twilight, Eglantine, and Soren are sent to the Firth of Fangs to meet up with an old warrior, Moss, to explain their situation and gather troops to attack the St. Aegolius Canyons which the Pure Ones are using as a base.

At a predetermined time after they would all have enough time to complete their tasks they’ll meet up again. But things don’t go perfectly for the Chaw of Chaws. Here are what all the different groups of owls did in no particular order.

Martin and Ruby eventually find the snake they’re looking for and talk to him, he helps them by giving them more information on the Northern Kingdoms and past wars. He also agreed to help them once he was sure they were sent by Ezrlryb.

Soren, Twilight, Eglantine and Digger went and talked to Moss, trying to convince him to recognize the urgency and help them fight the Pure Ones. But they’d have to meet with a council and that process just can’t be rushed. While they’re waiting for an answer they are all trained in fighting with Ice Claws and other ice weapons commonly used in the Northern Kingdoms.

However, they can’t get an answer in time and have to leave with it looking like they wouldn’t get any help, this makes Soren feel very, very guilty because he is the leader and getting more fighters was the most important job. He feels like he’s failed the rest of the group, by not ensuring the help of the Northern Kingdoms but also by staying as long as possible to hopefully get an answer which puts everyone more at risk.

Gylfie and Otulissa go to the great library but they find out it’s also somewhere with a vow of silence, so despite it being a place to learn about many things there’s hardly any talking allowed. They do their research and learn everything they need to, but their problem is that Gragg and Ifghar are also at the retreat and they overhear them talking about Ezylryb. {I’m not going to explain everything about their history, backstories or motivations, but for context I’m going to explain this very simply.} Ezylryb and Ifghar are brothers but Ifghar betrayed him and they fought on opposing sides of the war. Now Ezylryb is a teacher at the Great Tree and Ifghar was banned from fighting again, so he’s at the Retreat. Gragg is his Kielian snake partner, who fought with him and now stayed by his side. When they heard Gylfie and Otulissa talking they decided to try and learn as much as they could about the Guardians plans so they could then tell the Pure Ones in advance, with the purpose of getting back at Ezylryb.

After they all met up again and were about to start traveling back to the tree, they were attacked by owl Pirates who kidnapped Glyfie. Once they caught her and brought her back to their lair they trapped her and tried to get information from her about the Guardian’s plans. Except these Pirates were stupid and obsessed with their own appearances, so they were easily outsmarted. With the help of another background character from the Retreat named Twilla Gylfie escaped!

However, after Gylfie gets separated from the rest of the group they have to continue on to avoid getting caught in the rough Winter and to get back to the Great Tree before it’s too late to plan and launch an attack on the Pure Ones. When they get back to the Tree, they start to teach other owls to fight with fire and Ice Claws so they can all fight stronger against the Pure Ones. Soren refused to teach owls proven dangerous in the past these tactics, so instead he was employed on a special mission to destroy reserves of flecks around the Pure One’s base, after they had been placed strategically to disorient the other owls.

At the same time Glyfie starts the journey back home from the Northern Kingdom. They want to have the element of surprise for their attack, despite not having the extra help of the Northern Kingdoms they decide to go for it anyways. They make the decision to attack before the Pure Ones are expecting them to and from the opposite side so they wouldn’t except it.

They launch the invasion, fire spreads throughout the St. Aggies valley and owls flail around everywhere. Glyfie reunites with the other owls and brings owls from the Northern Kingdoms with her.

In the last part of the fight Soren was lured into an enclosed cave where he was forced to face off with Kludd. Soren didn’t think he’d be able to hurt his brother despite how mean and evil he was, but once he attacked Gylfie Soren knew he shouldn’t hesitate. However, it was actually Twilight who killed Kuldd because he was able to sneak up behind him while he was only focusing on Soren. With everyone working together they were able to win the battle and defeat the Pure Ones.

I liked the owl pirates because they seemed pretty random and out of place but they were also very funny characters. I also liked how they were easily outsmarted and fooled because of how focused they were on appearances.

The end fight was well written and it was cool when Gyflie came back and joined the rest of the owls. This book also showed Soren’s guilt very well and it makes sense that he refused to enable dangerous owls by teaching them how to fight with fire.

I also really liked how at one point the story was told from the perspective of a random guard for the Pure Ones since it made the story even funnier to see the heroes from the other side. You can clearly tell how scared most of the Pure Ones were of Soren and the Guardians, so it was a nice detail to help build up to the final battle.

Overall this book had a lot of different aspects and still told a coherent story. Most of the events in this series make perfect sense and even the things that seem unpredictable are sometimes foreseen in Soren’s dreams or other foreshadowing. I liked how they cut between different points of views with the other characters in different locations and didn’t just stick with Soren, this made it easier to know what and when things were happening.

The rest of this series is currently on my reading list and I will be posting the reviews of the other books when I read them.