The Complete History of Why I Hate Her By: Jennifer Richard Jacobson

While on her way to her summer job in Maine, Nola quickly becomes friends with the girl next to her on the bus, Carly. Nola doesn’t think too much of it when Carly later joins her at her job for the summer. But then she starts acting weird and Nola has to start questioning their friendship and if it was ever as perfect as she thought it was. 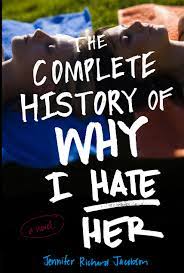 I give this book 3.5 stars (out of five). I really like this book, it was really realistic, had good characters and a relatable plot. The book follows Nola as she gets her first ever waitressing job away from home for a summer. Although she loves her family, she feels like her little sister Song (who is 13 and has cancer) is the only thing her parents care about. Obviously she loves her sister but she just needs a break from everything being about her (this is reasonable since almost her entire life has been looking after Song and she wants like two months to focus on herself and try being a normal teenager for a bit).

On the bus ride from Boston to Maine Nola makes unlikely friends with this really cool girl named Carly and they talk the entire bus ride, they exchange numbers and go on their ways (Carly is a babysitter also working a summer job in Maine). Nola gets a ride to the beach side hotel she’ll be serving and living in and once there she gets settled in. Her roommate happens to be a particularly interesting girl named Britney and Nola finds out that she’s pregnant and doesn’t know what to do about it.

While she’s on the phone with Carly she lets slip that her roommate is pregnant and really shouldn’t be working there. Carly proceeds to use that information to get Britney fired and take her job. Nola is surprised and delighted to see Carly again, she’s social and a natural friend to everyone while Nola is awkward and kind of shy. When they’re together everyone loves them, even the guests know them as best friends.

But that all changes as Carly starts acting less and less like a friend and more and more like competition. She starts often being mean to Nola, sharing her secrets, controlling and manipulating her, trying to take over her life and be her. Going so far as to go after the guy Nola likes, getting the exact same haircut as her and messaging Song, trying to make her hate Nola and take her from Nola; not even caring if she seriously hurts Song.

All those things happen throughout the summer and Nola ends up having to leave early, because Carly convinced Song to come to Maine and lie to her parents to visit them. But when she gets there Carly pushes her off a cliff into the ocean even though she has cancer and can’t swim. Song has to go home and to the hospital and Nola goes with them.

One thing I really, really loved was the ending. Nola basically accepts that Carly was almost like a hermit crab, looking to find someone else to be and that even though she doesn’t really know who she is or who she wants to be with each new decision she makes, she’s given a chance to learn what it means to be her, and Carly gave her that chance. And I think that’s a great perspective to have looking at her situation and what happened, and that mindset actually helped me in my own experiences.

This is basically a story of bad friendships, where one friend is controlling and starts freaking out when the other one stops willingly being controlled. Honestly, although it is unfortunate that lots of girls (and people generally) have been friends with or interacted with people like that. In fact, even right now I know multiple people like Carly. So this story is pretty realistic and I love that I could really relate to what Nola was going through. I think although this book can kill sometimes with second hand embarrassment and anger it’s definitely worth the read.