The Cursed Sea By: Lauren Destefano (The Glass Spare #2)

In this amazing conclusion to the Glass Spare Wil has fallen in love with Loom but to help him she must return to her kingdom and discover the origins of her curse, even when everyone there thinks she’s dead. But her cruel elder brother is now the king and Wil has to dive deep into her family’s secrets to uncover the truth.

Things aren’t going well in the Southern Isles either, the royal children there are constantly punished for everything they do. Wil, Loom and his cold-hearted sister Espel travel across cursed seas and many kingdoms. But they have to make peace with their own problems before they can secure peace between the kingdoms. Wil and her allies with have to outsmart their enemies over and over again if they hope to win this war. 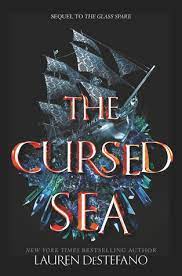 I give this book five stars (out of five). I absolutely loved it and it was a great sequel and finale to the Glass Spare series. It was way better than the first book and finished off the series in the best way possible.

I won’t go into detail about the plot, because I would have a lot of spoilers and you’d need to read the first book (The Glass Spare) which you should definitely read, it’s very well written and entertaining. Everything about this book will be confusing and hard to explain to anyone who hasn’t at least read the first book, so I won’t spend much time on it.

But I must say I love everything about this book and all the characters. It has great wars, romances and plot twists that you’d never see coming. I totally recommend this to everyone, even if you don’t really like fantasy this series will be the exception. I personally had friends blow this off the second they heard the main character was a princess saying, “I don’t like princess stories.” They wouldn’t even listen when I told them she was more of a spy and has a magic curse that brings death and beauty almost wherever she goes, don’t judge a book by it’s main character.