The Dangerous Art Of Blending In By: Angelo Surmelis

Seventeen-year-old Evan Panos has always tried to blend in, hiding his mother’s abuse from everyone around him and suffering in silence. But over the summer Evan had his first kiss with a guy and his best friend Henry became very attractive. They’re both closeted in a town where being gay is a huge no-no and romantic hijinks ensue. 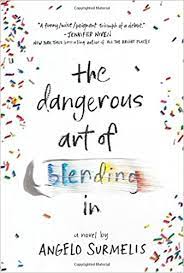 I give this book 4.5 stars (out of five). I absolutely love this book! It’s very well written, really well done and I love all the characters, well not all the characters but they’re all realistic and believable. The story starts when Evan Panos returns from a Bible summer camp and back home, to his abusive Greek immigrant mother. She hates him for being gay and his father, who is either unable or unwilling to stop his wife, his logic being that she’s had a hard life and you’ve had a easy one, so just deal with being abused for 13 years.

Over the summer Evan had his first kiss with a guy and his BFF Henry got hot. They’re both closeted gays in a town where being gay is a huge no-no and romantic hijinks ensue.

So, Evan has these journals he’s kept over the years where he documents everything his mother does to him and his thoughts and feelings, along with his drawings. He’s an artist so they’re actually pretty good, he writes and draws in it basically everyday. Henry is more open about his sexuality and liking Evan because he doesn’t have abusive parents who constantly reinforce homophobic ideas. One day when they’re hanging out they kiss and Evan doesn’t really know how to react, sure he likes Henry but he’s overwhelmed, scared, sad and generally confused.

Eventually Evan decides to give Henry his journals because Henry has complained that even when he tells Evan everything he never gets the same honesty and open responses back, which he has been doing. For example, everyone thinks he’s really clumsy because he always has bruises or scars because he knows not to tell anyone the truth because that would just make it worse. But he gives Henry the journals at an awkward time and Henry is drunk and making out with some random girl at the party before even having a chance to read the journals.

Jeremy (a mutual friend of Evan and Henry’s) sends Evan a video of them making out, I don’t even know why and obviously Evan is hurt. Because he just trusted Henry with all his deepest secrets and now he’s making out with other people. Evan gets the journals back, turns 18 and starts working at a local Deli. They get into an argument with things being awkward between them because even though Evan has the journals now, Henry has read them and Evan’s avoiding him at school because he doesn’t know what else to do.

[Spoiler warning, skip to the last two paragraphs to avoid them]

After that they basically get together and make up and things are relatively fine … until Henry comes out as gay to his family which is fine, they’re accepting and proud of him but they tell a few people and word spreads to school. To the point where Evan is beaten up pretty badly because they assume by default that if Henry is gay than Evan is too, Evan tries to fight back and ends up blacking out. He can’t remember saying any of it, but he comes out as gay and proclaims his love for Henry.

After that it’s a somewhat happy ending for Evan and Henry’s relationship, Evan moves out and gets accepted into a really cool art internship and they’re happy together. Although it did get worse before it got better. All in all, I loved this book, especially the characters. Every character was incredibly well written, even complete background characters and the relationship between Evan and Henry or Evan and his parents felt so painfully real.

I think the title is very good in relation to the story because it has a simple double meaning, talking about how it is dangerous for Evan to try and blend in and also his actual art and relationship with Henry. I also really like the way this book deals with abusive parents, it isn’t just a simple stereotype it is its own story, and the homophobia exhibited by many characters throughout. It all feels very real and it’s a wonderful story. If you’ve gotten this far in this review, you should probably read the book. It’s really good and reading it will be a very good decision