In this amazing conclusion to the Tara Trilogy Tara is yet again forced to face off with strong evil forces. It isn’t Zarku this time, but Layla (Tara’s step-sister) who is framing her for many terrible acts. Throwing suspicion on her and turning the entire village against Tara until she must turn to Lord Yama for help before it’s too late. But how can Tara convince the village she’s innocent when no one trusts her? 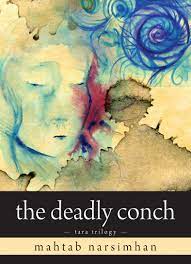 I give this book three stars (out of five). It’s a great book and an amazing conclusion to the Tara Trilogy, however this book is infuriating to read. This is one of those books that makes the main character suffer, while the other characters treat her badly and unfairly and only gives her justice at the end. Reading Tara struggling and being punished for crimes she did not commit, was terrible. Though it’s still a good book it is a bad experience to read this book while wanting Tara to succeed, but everything and everyone is against her and she still has to fight even after everything she’s already been through.

[Spoiler warning, this plot summary will not make sense if you haven’t already read earlier books in this series and it will also include many spoilers and an explanation of the ending. Please skip to the last paragraph to avoid spoilers.]

So the main story in this book is that Layla (Tara’s stepmother’s daughter) is doing bad things and framing Tara for them. Everyone believes she did it though, she is punished and her family is looked on as bad luck. In a devastating show of selflessness, Tara ends up giving up her own life to save the people of her village. But due to a deal she made with Lord Yama she can’t tell anyone what she’s doing, so when she’s framed for something she didn’t do but can’t truthfully tell where she was, she gets the blame for everything Layla did and is sentenced by the village leaders to be stoned to death.

However, she is saved by Lord Yama, who tells everyone the truth and forces Layla to admit to what she’s done. And through miraculous circumstances Tara ends up surviving and forgiving everyone for what they’d done to her (kill her little brother, set her house on fire, nearly stone her to death, accuse her of lots of things and instantly turn on her, etc).

So it’s kind of a good ending, not just to the book but to the series, but I still don’t think it’s worth it overall. From Tara’s perspective everyone she’s ever known suddenly started hating her and by the end she just has to forget all of that and forgive them once they know the truth. Personally I think that the entire story is made less impactful by the ending, and Tara should’ve had more of a happy ending because otherwise it just makes all the times when she was suffering seem like they didn’t affect her very much since she was easily able to forgive them. The small amount of justice Tara receives at the end of the book doesn’t add up to all the injustice she faces throughout the book.

Although I don’t like some of the plot points in this book I still think it’s great and have loved reading this series multiple times.