The Falling in Love Montage By: Ciara Smyth

What do all rom-coms have? A montage of the two main characters falling in love. But there is a distinct lack of lesbian rom-coms, so Saoirse and Ruby decide to create their own montage over the summer. But they’ll soon learn that they can’t have the good parts of a relationship without the bad too. 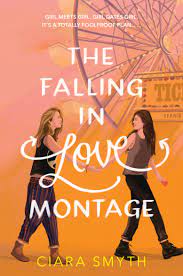 I give this book 4.5 stars (out of five). The Falling in Love Montage is a lesbian parody of all classic rom coms, they’ve got it all from long drawn out phone calls, to classic dates, to fights and a grand gesture. But with a lot more gayness and (at least in my opinion) more interesting and complex characters.

I really like this story and it’s probably my favourite book that truly centers around romance, while this does also have a major journey of growth for the main character Saoirse and other things happening in the background. I really loved this book and Saoirse despite her flaws and bad decisions.

Saoirse’s mom has early onset dementia and she has to live in a Care Home, because there’s a genetic component to dementia Saoirse also has a higher chance of developing it early in life. And on top of that her Dad is remarrying a woman named Beth, who Saoirse isn’t the fondest of.

This story takes place over the summer and Saoirse was planning on going to Oxford but now she’s hesitant to leave because she doesn’t want to be too far away from her mom for too long. And she’s starting to feel like going to university will be useless anyways because there’s a chance she’ll forget it all soon.

Saoirse is also still drowning in the aftermath of a messy breakup with her long time best friend and girlfriend Hannah, this also led her to fall out with her other best friend Izzy because Izzy knew that Hannah was planning to break up with her and didn’t say anything. After her break-up she set a rule for herself, to never kiss girls who might be interested in something more serious, she pledges to never date again because she could end up forgetting them or leaving them stranded with the person they love not able to remember them.

But something or rather someone challenges this rule, when she meets Ruby at a party and there’s definitely more than just an experimental kiss between them. In the following days Ruby and Saoirse get talking and she finds out that Ruby loves rom coms (Saoirse is a bigger fan of horror movies). After bonding over the lack of any good lesbian romance films they eventually agree to reenact the falling in love montage seen in most rom coms. So they can get the good parts of the movie without the serious commitment of an entire film or real relationship. Saoirse agrees, especially since Ruby is only in town for the summer anyways.

The rest of the book is them living out the montage, but they soon find that it’s impossible to have all the good parts of a relationship without the bad.

[Spoiler Warning, there are spoilers throughout the rest of this review. Either stop reading now or keep reading at your own risk.]

As Saoirse breaks her own rules and lets Ruby in, Saorise also finds that her falling out with Izzy and Hannah doesn’t have to be permanent.

I think Saorise is a very complicated and complex character, I love her sarcasm and her attitude but there’s so much more to her beneath the surface. I think this shows a lot in her relationship with her parents and how she approaches romance. Her being susceptible to early onset dementia affects every aspect of her life and her future. She’s forced to contemplate whether it would be worse to live her life to the fullest only to have it all taken away from her or to hold back only to never develop it and forever regret her choices earlier in life.

Her development from beginning to end really shows how much she’s grown and changed, she talked things out with Izzy and was able to understand her point of view, she was able to be more open and honest with her Dad, get closer with Beth and with Ruby she was able to explain why she didn’t want to have a serious relationship with her.

I think a really interesting part of Saorise’s character development is her deciding to study history, before she didn’t know what she wanted to study and I think history was a really good option for her. And her closing words reflect that, “History is who we are. The past shapes us. Even the parts we can’t remember.” (pg. 355).

I really like the ending and where it leaves Saorise, she and Ruby obviously can’t stay together. It was only ever meant to be a summer fling even if they had real feelings for each other. This is an even better ending because it breaks the cycles of couples always staying together against all odds in romance movies and novels.

Although Saoirse and Ruby can’t stay together they agree not to text or send letters, but instead to send each other what they call life debris. Random little bits and pieces of their lives that they’d like to share with each other, so they don’t have to completely lose contact with each other.

This falls into the category of LGBTQ+ books that say ‘lesbian or bi girls,’ in my opinion this line could’ve been fixed or made more inclusive by changing bi to queer to make room for girls who are attracted to other girls but don’t idntify as lesbian or bi. And it also would’ve been good to see some more inclusivity and representation for non-cisgender characters.

It’s a pet peeve of Saoirse’s when straight women call their female friends ‘girlfriends’ and I agree, although I think it’s less common nowadays. I have a funny story about this, when one of my friends was little she heard a women talking about doing something with her girlfriends and her first thought was that she was a poly lesbian, instead of just referring to her platonic friends and I think that’s beautiful.

I love the background character Barbara (she works at the shop they buy Beth’s wedding dress from) because she’s so random and funny. But I think the most unrealistic part of this book is that Beth got the first dress she tried on, unless Barbara is just that magical. I also really liked the background character Morris, who shares his wisdom about relationships with Saoirse and Ruby, that the length of a relationship isn’t what makes it special.

Overall I really loved this book and the main character Saoirse. I would highly recommend it to anyone looking for a compelling romance novel.