The Fault in Our Stars By: John Green

Hazel Grace meets Augustus Waters in a Cancer Kids Support Group in the heart of God and that’s the start of a messy story of love, death and Amsterdam. 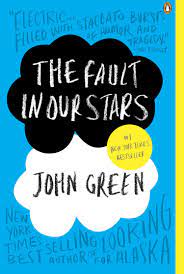 I give this book 3.5 stars (out of five). This book is widely considered a modern classic, like Harry Potter of The Hunger Games. Most people have at least heard of it and likely either read the book or seen the movie. Until recently I had done neither of those things, although I knew a bit about the story so I decided I’d read the book, mainly to understand what other people were talking about because I wanted to know if to me it seemed worth all the success and attention it got.

For those who don’t already know this story follows Hazel Grace, who is a survivor of terminal cancer in her lungs. She survives because of a trial drug called Phalanxifor but still needs help breathing. One day at Cancer Kids Support Group she meets a boy named Augustus Waters and after that they instantly start becoming close.

For this book I’m not writing a full summary because it’s so popular you can easily find them all over the internet if you need it. This review contains spoilers, read at your own risk.

I really liked Hazel’s perspective and the general tone of this novel. It was generally very philosophical and nihilistic and because both the main characters were terminally ill it changes that a lot compared to any other YA books with similar tones. Because in this story the characters don’t only talk about life like it’s temporary, that is their lives. Many characters in YA novels talk like this but this is the rare case where it’s true and it isn’t just an example of teen angst. This tone is especially evident in how Hazel and Augustus talk about death and even how Hazel is constantly reminding her lungs to be lungs.

I liked the romance between Hazel and Augustus, while it did move relatively quickly I think it was still very organic and complex. Even after only knowing each other for a short time they both were willing to do major things for the other, like Augustus using his wish to fulfill Hazel’s dream. And since they were both terminally ill they both had conflict about whether or not it was okay for them to become close with each other since there was a high chance that one of them would die and leave the other behind.

I think it’s very cute that one of the first things Hazel and Augustus did was exchange their favourite books, reading someone else’s favourite book feels oddly intimate and can reveal a lot about them.

For most of this book it’s Hazel who doesn’t want to get into a serious relationship with Augustus because she’s worried she could die, especially since his last girlfriend died. But there’s a twist and Augustus ends up being the one who dies. I think this twist was very well done and I certainly didn’t see it coming.

I feel like it was always pretty clear that one of them was going to die before the end of the book but I really thought it would be Hazel and they’d do something ironically similar to the end of An Imperial Affliction. So I was surprised when the story took a turn. I like the ending although it’s sad, I think this book approaches loss and grief in a very unique way.

I really liked how aspects of this book were about a fictional book, An Imperial Affliction By: Peter Van Houten. It was a shock when they got to Amsterdam and he wasn’t anything like they expected him to be. It’s very surprising because Hazel looked up to him for years only to realize he’s an alcoholic, who can hardly remember writing his own novel and doesn’t have the answers she wants.

I think he adds another layer to this story because beyond Hazel and Augustus it’s about how cancer affects people and this shows in Hazel’s parents, Augustus’s family, Isaac’s ex-girlfriend Monica and Peter Van Houten. Despite not being the actual people with cancer it can show how the side effects of dying trickle down to them too.

This makes the story even more complex, if you’ve read the book then you’ll probably remember the scenes of Hazel looking through people’s Facebook walls after they die and seeing all the relatively fake, ingenuine or insignificant condolences posted there. These messages piss Hazel off because most of them didn’t even know them that well and everyone’s going to die someday so it doesn’t make too much of a difference if you die young or not, you’re still dead.

I think Augustus was a very interesting character, mainly because he really wanted to do something influential or important with his life. He wanted to be noticed by the universe, instead of notice it and this created some of the only major conflict between him and Hazel, because he made such a big impact on her and she wanted that to be enough for him.

I think it stands to say that while the people who do leave a big impact on the world are more remembered than the average people, every single person will significantly impact the people around them and their friends and family. So even if you didn’t impact thousands of people, your existence changed the world, impacted people and left a mark and that’s kind of the most the majority of people get.

The following section is based on certain moments in the book.

I liked that this book sometimes shows dialogue like this Me: Words Mom: Words, instead of normal dialogue. This is likely just because of Hazel’s point of view but I really like it and I think it would be interesting to see this more in novels.

I think Augustus’s metaphor with the cigarettes is so widely known, even amongst people who don’t know the story that it had a very big cultural impact.

The title of the book The Fault in our Stars, is mentioned in one of Peter Van Houten’s letters to Augustus and it comes from Shakespeare, Peter says that Shakespeare couldn’t have been more wrong in expressing that the fault is in ourselves and not in our stars. (pg. 111) He says that if their stars weren’t perfectly crossed then Hazel and Augustus never would’ve met and that is the only way it can be. It’s interesting that this book is named after something only briefly mentioned but it also fits with the story and themes very well, and is part of what led to it being extremely well known.

I was interested by the reference to the French painting Ceci n’est pas une pipe (“This is not a pipe”), mainly because I already knew what it was and as a relatively young person I never know what’s going on when it comes to academic references in books like this. But the message that all representations of things are inherently abstract can also be applied to fiction and the characters in An Imperial Affliction, because most of them are metaphorical representations of things.

I liked the message and idea that some infinities are bigger than others, but that doesn’t mean a smaller infinity isn’t infinite. And even if Augustus dies he and Hazel had an infinity together within their numbered days.

I absolutely love the scene where Hazel is thinking about why she didn’t want Augustus to kiss her and she’s just like, well I didn’t think my first sexual encounter would be prostitutional but…

There’s a very funny moment when Hazel, Augustus and Isaac are egging his ex Monica’s car and Augustus gets her mom to leave them alone by threatening to call the cops on her. It’s hilariously backwards logic but it somehow works. (pg. 229)

Overall I really liked this story and I can see how it got so popular and widespread, especially since I believe it was published in 2012 and since then many similar things have been created and published.