The Glass Spare is the beautifully tragic story of Wilhelmina or Wil. She is one of the royal children of the kingdom of Northern Arrod, but since she’s the youngest, the only girl and not the heir she lives a secretive life. She spends her days venturing outside the castle and lurking through the markets.

But one day she discovers that she has a curse, when she touches someone they turn into rubies. And Wil’s new ability changes her life forever, turning ever living thing she touches into gemstones is a gift and a curse. And Wil must face a million challenges before she can use her curse to create peace between the kingdoms. 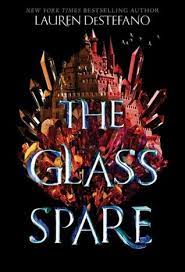 I give this book 4.5 stars (out of five). This book is very well written but there’s also so much going on at once that at times it’s hard to keep up and understand it. The story follows Wil or Wilhelmina, the youngest of the royal children of Northern Arrod. Not being the heir to her kingdom’s throne Wil lives her life in secret, training to be a spy and sneaking out of the castle.

Her three older brothers are Owen, the heir and oldest, Baren, the second oldest and Gerdie the alchemist and Wil’s closest siblings, who helps her navigate through the markets and life outside the castle.

The story picks up when Wil is out in the village and is attacked by a seller of illegal materials after she tries to steal from him and in a panic she touches him and he literally turns into rubies. The grass underneath her turned to emerald, everything she touches turns to various gemstones. After that she mainly just tried to hide and figure out her strange abilities or curse.

Her brother Gerdie was with her and helps her attempt to understand it. Wil can turn any living thing into gemstone when her heart is racing (unless it’s already dead, like fruit that’s already been off the tree too long). While sneaking out of the castle with Owen, Wil falls and Owen catches her subsequently turning into ruby. The king (their dad) sees them and instantly banishes Wil. Leaving Northern Arrod was easy and quick enough, but through a very weird turn of events (that I can’t fully explain here) she ends up fighting the same war her father is but with the banished prince of the Southern Isles (the kingdom Northern Arrod is fighting against).

Loom wants to fix his kingdom and stop the war and somehow he is immune to Wil’s power. Wil wants to help him stop the war but Loom also wants to kill the entire Northern Arrod’s royal family as a way to end the war, which Wil is obviously against (since that includes herself and her brothers). Ever since she left Northern Arrod Wil has been keeping her identity a secret as she wasn’t the heir, not a lot of people know she exists so she’s able to stay secretive.

By the end of the book Loom and Wil have fallen in love but in order to save Loom’s life Wil must return to her Kingdom and find out why she was cursed with her abilities. She has a month to sneak back into her castle and get the information she needs without getting caught (everyone there except her father thinks she is dead and she’s never told Loom of anyone else who she is).

I’m expecting in the sequel (The Cursed Sea) that Wil will have to sneak back into the castle without being seen or caught by any of her brothers or her father. But she’ll also have to tell Loom who she really is and resolve the whole war between Northern Arrod and the Southern Isles.

One of my favourite things about this book is the title, it stood out to me at first but now that I’ve read the book and understand the plot I see just how well it fits the story. It refers to the main character Wil, her being a spare for the king and her abilities making her like glass. The image on the cover also has significance and meaning. The image shows one castle split in half, one side in red and has rubies coming out of it and the other is orange and has citrine (another gemstone) coming out of it. I think it represents the two kingdoms at war Northern Arrod and the Southern Isles, they’re the same yet slightly different. I also think it represents Wil and Loom, they’re very similar although they’re from different kingdoms, they’re both banished royal children and they both want peace. It really has a lot of symbolism.

Overall I really recommend this book to anyone who enjoys a good princess story. I feel like lots of people hate on princess stories for always being the same and repetitive but there are also many amazing princess stories out there that I think everyone should read.