The Inquisitor’s Tale By: Adam Gidwitz

Set in France in 1242 this is the story of Jeanne, Jacob, William and their Holy dog. While fighting knights, dragons and sitting with Kings Jeanne, Jacob and William will do everything they can to save the lands. Told from multiple perspectives as our narrator hears more about them from different people at the local Inn, this is a fun and relatively educational tale. 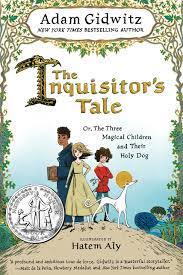 I give this book five stars (out of five). Not only is this a well written story, with tons of great characters but it’s also educational. Reading this book taught me some many things I didn’t know about the middle ages since it’s set in the mid 12th century. By the way this book uses really old English and doesn’t explain half the things it talks about, so if you have a hard time understanding things that aren’t fully explained this might not be for you. I’m also not going to explain a lot of the plot because I’d basically have to summarize every detail for it to make sense, so please bear with me in the following summary.

The story follows three magical children and their Holy dog. Jeanne is a peasant girl who can see visions of the future, William is a young monk with supernatural strength and Jacob is a Jewish boy who can heal any wound.

What makes this especially interesting though is that the story is told from the perspective of someone that we (as readers) don’t know until the ending of the book. It’s in first person but we have no introduction to them and we aren’t given any information about them. So, this mysterious person goes to a local Inn’s bar to try and hear the story of the three kids. The character really wants to know the story, to the point where it’s kind of suspicious. Even going as far to buy people drinks and food to get them to tell more. So, I’m not even going to get into the main story but it’s genius to have the perspective constantly switching as different people at the Inn tell the different parts of the story. Which is an amazing concept and form of storytelling, the characters at the Inn also ask questions or talk amongst themselves during the stories and the author makes it clear and not confusing. So it’s always easy to tell what’s going on despite the slightly confusing format.

So, even though I loved the concept of not knowing who the character that the story’s perceptive is told from halfway through I got suspicious. It was obvious that they were the Inquisitor from the title but I didn’t know what that meant besides being the one who asks all the questions and starts the storytelling. I wondered how this character had any significance to the plot or main characters. And towards the end I realized I was right to be suspicious, the Inquisitor was also the main bad guy in the story and he was looking for information on the kids so he could stop them. I loved this twist even though I could kind of see it coming.

Another thing that makes understanding and reading this book exciting and fun is all the pictures, on the sides of pages there are illustrations of what’s happening in the story. They’re very well done and they help the flow of the story.

At the end of the book the author also has a section where he writes about how and why he wrote the story the way he did. Even though this book is fiction, many of the events that happen in this book actually happened in history which I found really surprising. Like the burning of around twenty thousand volumes of Talmud in the center of Paris, The Holy Nail being lost and then found again, etc. In fact, almost all the characters were based on real historical figures or things that happened. Adam Gidwitz even included an Annotated Bibliography with sources citing what information they have and where they might be relevant in the story.

The little things that only make sense after you’ve finished reading are some of my favourite parts of this book, subtle details that foreshadow the twists ahead. Anyway, I loved reading this book and I hope you will too.