The Journey By: Kathryn Lasky (Guardians of Ga’Hoole #2)

This installment of Soren’s story follow him and his newfound friends as they journey across the kingdoms to find the mythical Great Ga’Hoole Tree. They believe it’s real and they will find amazing owls there, their goal is to warn them about St. Aggies. An evil academy that Soren and his best friend Glyfie recently escaped. But their journey isn’t always easy and there’s even more dangerous things out there. 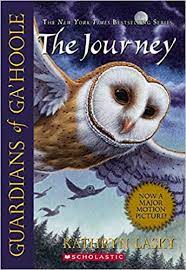 I give this book three stars (out of five). So far I’ve really liked this series, I like all the characters and the mysteriousness of the plot. In this book not a ton of extremely important things happen, so I’m going to give a very basic summary of the main events and ask that if you don’t already know the characters and story of the first book, you read that or my review of it first.

This book is accurately titled the journey because a good portion of the book is the five main characters; Soren, Gylfie, Twilight, Digger and Mrs. Plithiver on their journey to the Great Ga’Hoole tree. The band has their diversions and distractions along the way, even getting slightly lost at one point, but they eventually do make it to the Ga’Hoole tree.

It is real, and there’s a very real group of owls living there. The owls learn that at the Great Ga’Hoole Tree lots of owls are taught different skills and lessons by teachers called ‘Rby’s, at the tree they’ve also learned how to harness and use fire. They have candles and small fires used for cooking, they also have a real library and lots of hollows and room for owls. Soren, Gylfie, Digger and Twilight join the other owlets going to lessons and learning different skills.

After a certain amount of time or when the Rybs think an owl is ready they will be selected for a chaw, which is a group of owls that specialize in a specific skill like search and rescue, navigation, etc. One of these is colliering, carrying and retrieving coals from forest fires to be used in forges or more practically. Another is Ga’Hoolology which teaches how to properly take care of the tree so the resources can sustainably replenish.

There’s one Ryb called Ezylryb who is particularly intimidating to Soren and the other owls, mainly because of his grumpy personality and missing talon. He’s the teacher for the weather navigation chaw, which goes with colliering because if you’re flying into a fire you need to know how to navigate and understand the weather.

Outlissa is a spotted owl, who has a few classes with Soren and the others. She’s known to be very annoying and a smug ‘know-it-all’ but she can also be sort of nice. She’s kind of friends with the others but not really because they don’t like her that much. Primrose is another one of the owls there, she’s younger and arrived at the Tree at the same time as Soren, Gylfie, Digger and Twilight.

The night the owlets are picked for chaws, Digger gets picked for the tracking chaw, Twilight for the search-and-rescue, Gylfie gets navigation and Soren and Outlissa get double chaws, colliering and weather. Now instead of having general classes in all fields they have certain classes with different rybs depending on the chaw.

A while later, Gylfie happened to find a place in one of the passageways where you can overhear the older, leader owls having meetings. She has overheard something that she thinks is about the ‘You only wish’ and goes back to their hallow and wakes up the others. They all go down and listen in on the meeting, where the older owls discuss the Rogue smith owl and something else that they won’t fully talk about out loud.

[‘You only wish’ refers to a conversation with a Rogue smith owl the band had encountered a while ago on their way to the Tree. They were talking about a great evil and when Soren and the other’s asked if they were talking about St. Aggies, they said ‘You Only wish’ implying that there’s something much worse out there.]

Meanwhile chaw classes are still going on and in Soren’s chaw, they’re learning and doing more and more things. Eventually they even learn lots of stuff about flying in extreme weather and how to safely pick up coals in a fire, Soren seems to have a special talent for that.

[Spoiler warning, please skip to the last paragraph to avoid them.]

Towards the end of the book, there’s a disaster. In a forest on the mainland a bunch of stranded owlets were found on the forest floor, nowhere near nests and very out of place. Digger, Twilight and Primrose were there helping to find and rescue the owlets, it was very strange and all the owlets were talking nonsense and seemed to have just fallen out of the sky. Miraculously one of the owlets found during this weird event was Eglantine, Soren’s long lost little sister.

Back at the Tree everyone was working to help with the owlets in any way they could, when Eglantine gets to the Tree she doesn’t recognize Soren and can only babble weird things. But later after most of the owlets had recovered from initial injuries and shock they were still unable to really focus or stop talking nonsense, a festival happened at the Tree. Trader Mags is a respected magpie who came by the Tree sometimes to trade items she’d picked up.

Through a combination of music and the moonlight hitting a shiny rock at just the right time, Eglantine gets her memory back and can finally think freely like a normal owl. The last important thing you find out in this book is that Ezylryb never returned when he left to help assist the rescuing of all the owlets, the ending is an ominous cliffhanger.

Overall I really liked this book, it wasn’t as action packed as the first book but it was still good and I’m sure it sets up the rest of the series greatly.