The Wishing Spell By: Chris Colfer (Land of Stories #1)

This magical story follows twins Connor and Alex, after they fall through a magical story book and end up lost in the Land of Stories. There they have to try and figure out where they are and how they can get back home, while entangled with the many fairy tales and characters. 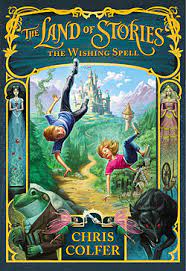 I give this book three stars (out of five). This is an excellent first book in an incredibly successful series. This series is especially great for younger readers, late elementary school age like about eight-twelve years old. I read this book when I was a lot older, most of my friends had read this series in late elementary school or early middle school, when they were about ten-twelve. Everyone I talked to only had positive things to say, the only reason I ever read this was because lots of people told me I had seriously missed out on some amazing books.

I personally have always been a big fan of stories putting twists on, modernizing or including classic fairy tales and tropes, so I already thought I would like this series. Unfortunately because I did read this a bit later in life it was clear to me that it was written for a younger audience and I didn’t enjoy it as much as I probably would’ve if I had read it earlier. Despite that, I will give you my opinions on it and a short summary of the plot.

It follows twins Alex and Conner Bailey, they’re just about twelve and they’re in the same class at school. Their Dad died about a year ago and because of this they also had to move and their mom has to work overtime and is still struggling financially.

For the twins birthday their Grandma (their Dad’s mom) comes over and visits them. For their birthday she gives Alex The Land of Stories Storybook, which has been their Grandma’s for years. When the twins were younger their Grandma and Dad used to read them the stories and make them come to life with their storytelling.

However, after Grandma leaves and the day is over Conner notices a change in Alex, she starts acting very weird and unlike her. For some context, Alex is a total teacher’s pet and a top student and Conner often has problems with class.

So, when Alex starts struggling in class and acting strangely Conner is determined to figure out what’s going on. It turns out the book Grandma gave Alex has been acting even stranger than her, it’s been glowing and humming and acting very odd for a storybook. Alex had been experimenting with it, figuring out if you opened the book and dropped things into it when it was glowing they’d disappear.

At first when Alex tries to tell Conner this he thinks she’s going crazy but fortunately right then the book started glowing again and Alex was even able to hear sounds coming from inside the book and an unlucky bird even flew through it.

Through an only slightly unrelated turn of events Conner ended up with detention and by the time he got out and was headed home he’d already realized that Alex would try and see where the book led to, where all the things were going and coming from. When he finally got home he ran straight to Alex’s room and shouted “Alex! Don’t do it!” but he scared her and she fell straight into the book! Without almost any hesitation Conner jumped in after her and they ended up in The Land of Stories, a magical world where all the fairy tale characters and places exist and live. Mythical creatures also live there like many different talking animals, fairies, mermaids and many more. Alex and Conner now have to try and figure out where they are, how to get home and what to do next.

[Spoiler warning, the next few paragraphs will have spoilers and only make sense if you’ve read the book already. To avoid that please skip to the last two paragraphs, thanks.]

Now there were a few specific parts and characters that I personally really liked or have something to say about. Firstly, Froggy the frog-person and Little Red Riding Hood are both amazing characters. I really liked certain parts like the twins trying to sneak in and out of castles and the fairy’s story.

Another thing I really liked was the reveal that their father was from The Land of Stories and that their Grandma can travel between the two worlds, I think that was well done, a good plot twist and also a good way to make the main characters more special and unique because they’re technically part fairy or magical.

I think one of the best things about this book is the way they present the Evil Queen’s story, at the start of the book with foreshadowing in the Prologue and then slowly giving you more information on her and what she’s doing from the perspective of the twins. It’s to the point that when you finally found out her story, what happened to her and why she did what she did, it’s extremely surprising and catches you and the other characters off guard.

Overall I really enjoyed reading this even though I was older than the target audience. I think it’s still a great book and series to read. If you’re younger or have younger kids or friends this would be a great book for them or you.

Personally although I did enjoy reading this I didn’t find it interesting enough to want to read the rest of the series. There are six books in total and if I ever have the time or another specific reason to get back into reading them, I might post more reviews later on. But as of right now it’s something I’m not interested in, mainly because I think I’m too old to fully enjoy it and I only read it because lots of my friends loved it when they were younger.