The Live-Forever Machine By: Kenneth Oppel

Young Eric somehow finds himself stuck in the middle of a battle between two immortals on different sides of history. Should history be forgotten or persevered? Remembered or lost? Eric must fight for what he believes in, but he has to decide where he stands first. 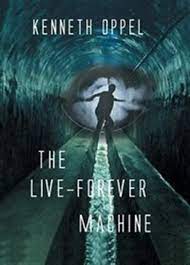 I give this book three stars (out of five). This book is very well written and educational. This book is mainly about history and teaches the reader dates and information about many different historical events, which is one of the many reasons I recommend this book to you.

The story follows fourteen year old Eric who witnesses a fight between two strange people at his city’s museum. And somehow finds himself caught up in a battle to save history and preserve the past. The two strange people are both immortals and from ancient Rome, one of them named Alexander wants to preserve the past while the other, Coyle, wants to destroy it and live for the future. While trying to stop Coyle from destroying the museum and stop him from unmaking Alexander Eric gets caught in between the two.

He finds himself asking “What’s the point of preserving history if it’s only facts and dates?” and over all the events of the book Eric realizes what’s really important about history. That it’s not about dates and numbers and what happened when, it’s really about the people. The people that lived in that time, what they’re lives were like, their stories and how they led to our current life. Not just the kings and historic figures, everyone that ever lived is a part of history, for better or for worse. It connects us all, even if they aren’t written about in history books, all those people lived their lives and that’s history.

Anyway, I really like this book’s message and it’s view on history, especially how the author connects the battle between Alexander and Coyle to Eric’s dad and how he can’t stop thinking and writing about his dead wife. The personal connection to history and the museum is what motivates Eric and after the main plot between Alexander and Coyle is done Eric is able to understand and connect with his dad about his mother, which is another reason why the ending is great.

I personally really enjoyed reading this book and recommend it to anyone who would enjoy a book about history.