The Odds of Lightning by: Jocelyn Davies

Tiny, Lu, Nathaniel and Will are hardly even friends anymore. So, it’s more of a coincidence that they all end up at the same party the night before the SATs. That night there is a terrible lightning storm in New York, the entire city is closed down with now public transportation and everyone is encouraged to stay inside. But what happens when they’re stuck on a roof in the middle of the storm?

This lovely story follows the four main characters and their journeys of discovering themselves and each other. 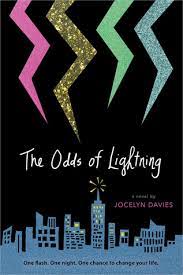 I give this book four stars (out of five). I love this book so much. So, I read this book last year and was recently rereading it. Somehow I completely forgot there was a plot twist at the end and I just had to deal with a major plot twist all over again.

A few things I really love about this book is that it switches the perspective from one of the four main characters each chapter, this allows the reader to have an understanding of everyone’s point of view and it also switches between the present and the past. This explains things that happened in the past as you read and it also serves as a way to tell what time it is and how much time has passed between the present and the current chapter. These two plot devices help tell the story, if I already knew all the things that happened in the past I would already know too much going into reading the present and it’s honestly a brilliant concept.

The four main characters Tiny, Lu, Will and Nathaniel are old friends that somehow end up together and have to face all of their fears in a twist of fate. Tiny is small and invisible, she’s quiet and shy. In fact, sometimes she thinks she’d never do anything if Lu didn’t force her to. Will doesn’t even know who he is anymore, he spent three years trying and pretending to be someone he’s not. Nathaniel has lived his entire life in his older brother’s shadow, Tobias has always led the way and Nathaniel followed. Never being quiet good enough, never filling his brother’s shoes but always being close. And Lu or Luella was afraid of being vulnerable, after her father left she could never talk to anyone about anything, never admit that she even has feelings.

Through an odd string of events on the night before the SATs Will invites Nathaniel over to study (they aren’t really friends but sometimes they met up to study together) but instead ends up on throwing a party at his house (his parents aren’t home and there is a really bad thunderstorm as well). Word of the party gets out and Lu is dragging Tiny to Will’s party, and in a few slightly complicated situations all four of them end up locked on the metal roof in the middle of a lightning storm.

(This part won’t make any sense unless you read the book but it’s important to say anyway) Tiny attracted the lightning to her and it hit them. Simply put, they were struck by lightning in the middle of New York. After being struck by lightning they all seem to have changed and gained a new ability.

[Spoiler warning, you can skip to the last paragraph to avoid them].

Tiny turns more and more invisible as time passes, nearly almost completely fading away by the end of the story. Will physically turns into other people, the other people he wants to be while he is trying to find himself. Nathaniel gets actual superpowers like super strength, heightened senses, and intelligence. While Lu is completely numb, she just doesn’t feel anything.

Throughout the whole night they face their fears by turning into the things they wanted to be but also they feared to become, come together as friends and find the magic in the city. By the end of the night they have all come to peace with themselves and who they are, they’ve faced their fears and done things they never thought they would do. But to reverse the effects of the lightning, they need to be struck by lightning again. However when they are, they forget everything that happened since they were struck the first time. So they forget all the meaningful moments they shared and all the important things they did. But they still make it to the SATs and take the test on time.

I really like the ending/plot twist even though it’s kind of annoying because they had all this character development and they all knew exactly who they were and wanted to be and then they forgot it all. But I think it is great and it really works with the story.  Another thing I’d like to say is that even though nearly all of this story takes place over the course of one night it’s still very well paced and never feels boring. Anyway, this book is very well written and has an amazing meaning and message. I recommend this to anyone who wants to read a great teen novel (but this book does include swearing, if that’s a problem for you).