The Peculiar Night of the Blue Heart By: Lauren Destefano

Lionel and Marybeth could not be more different, he is wild, she is calm and quiet. Lionel has some kind of connection with animals, and while Marybeth tries to understand him it just doesn’t work. But when she tries to follow him, she finds something else. After that night, she is different. Marybeth and Lionel have to figure out what happened and how to help each other. 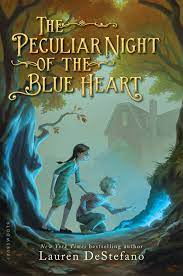 I give this book 2.5 stars (out of five). It has a great plot, characters and writing. The main characters; Lionel and Marybeth are kids living in an orphanage. Lionel is wild and not exactly human, he can tame any animal he meets and spends most of his time switching from animal to animal (sleeping like a house cat, hunting like a lion, etc). Marybeth is the opposite of him, she’s soft-spoken, well behaved, she wears glasses and likes to read.

But Marybeth has always liked Lionel and tried to understand him and his world, but she could only watch as he coaxes rabbits from their holes or feeds birds from his hand. If Marybeth tried to do it with him it wouldn’t work, the animals would run away if she got too close. But one night in an attempt to follow and find the blue fox Lionel had seen Marybeth snuck out into a storm and followed it to the river, but fell in. Seeing the face of a blue creature appear in front of her and waking up in a barn hours later when the police finally find her. She was different after that, wilder.

One morning during breakfast one of the older orphans tried to take her food, her eyes flashed blue and she attacked him, biting his neck pretty badly. Lionel and Marybeth spend weeks trying to figure out what this blue thing is. It’s inside Marybeth, sometimes taking control, making her sleepwalk back to the barn or making her fight, run or hide when it’s afraid. After ruling out any type of animal they turn to spiritual things; like ghosts and spirits and stuff.

Meanwhile Mrs. Mannerd (the owner of the orphanage) notices the change in Marybeth and calls in a doctor to check her out, this frightens the blue fox thing making Marybeth lash out. Mrs. Mannerd sends Marybeth to a type of psychiatric hospital for kids, leaving Lionel alone with a tutor, which was a mistake. Lionel runs off and goes to the barn the blue thing has been leading Marybeth too, digging under the spot where it likes to sleep Lionel finds what the blue thing had been trying to show them.The mostly decomposed body of a girl in a yellow dress, the original body of the blue spirit, though her name was Liza.

In the end Marybeth break out of the hospital, Lionel finds her and they convince Mrs. Mannerd to take them to the farm to show her the body. Marybeth is really sick from being out in the cold. While she’s recovering Liza shows Marybeth her final memories and how she died, Liza leaves Marybeth and is ready to live on her own. Marybeth gets better in time for the funeral, Lionel and her go together and Liza is finally able to move on.

Overall I did enjoy reading this book, but it is pretty sad so just be aware of that going into it.