The Queen Underneath By: Stacey Filak

The Above and Below had a shaky truce that shattered when both they’re leaders are killed. In an interesting turn of events, Gemma the new Queen of the Under, must ignore their differences and team up with Tallon the heir to the throne of Above.

Unlikely friends must team up to fight for what they believe in. And despite the approaching war, romance still sparks. Challenging expectations and gender roles Tallon discovers love with Elam, a sex worker and one of Gemma’s friends. 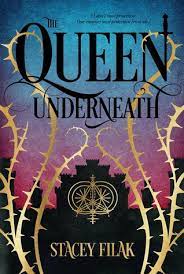 I give this book two stars (out of five). This book is wild; there’s a lot of weird stuff, completely unexplained lore and characters that seem like they were randomly thrown together. But apart from all of that, it’s fine. Just a warning there’s lots of swearing and mature and sexual content, so be aware of that.

Anyway, the main characters are Gemma, the new Queen of the Under, who’s brave, street smart and unpredictable. Tollan, the heir to the throne of the Above and king for a short time, who tries to do what’s right, is short tempered and gay. Wince, Tollan’s best friend, he’s only there because they’re friends and doesn’t have any other relevance, who’s smart, kind and sad.

Those are the main characters, there’s lots of other relevant characters, but I’m not going to list off all their names and characteristics.

The Under and Above are both being rocked by a group of mage women who have been held captive, used as slaves, tortured and slowly killed for centuries, who are now fighting for their freedom. Gemma and Tollan are thrown into chaos, both blindly trying to survive and protect their friends and family.

I’m not going to explain the main storyline because even I didn’t fully understand it but here are a few highlights (with spoilers, skip to the next paragraph to avoid them), Tollan being a suppressed gay guy, in a world where women are owned and sold and he can’t do anything right. He meets and falls in love with one of Gemma’s closest friends from the Under and finally finds something real. A mage women aiming a mark at Tollan and Wince pushing in front of him to take the hit and then Tollan hitting him in the back of the legs, making him fall and getting hit in the chest and die (even when they both could have gotten out of the way alive). And Tollan coming back to life because the main character never dies.

Overall this book was okay, but not the best and honestly kind of confusing (half the time I had no idea what was going on or who the characters were) but it’s fine. I might just be too young to actually appreciate this, so if any adults or older teenagers have read this and have different opinions feel free to share them below.