The Revenge By: Hannah Jayne

When his breakup with his ex-girlfriend Hope turns toxic Tony does everything he can to fight back against her relentless attempts to make him look bad. Hope seemingly has no limits and is willing to go way too far to frame Tony, even when it puts herself in danger. 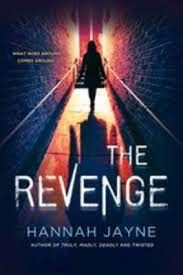 I give this book 2 stars (out of five) because all the main conflict never really amounts to any big changes or development in the end. I really liked the main character Tony but because the book spends most of the time focusing on him, it’s mainly just descriptions of him being stressed out.

This story follows Tony and his conflict with his ex-girlfriend Hope, first he broke up with her and at first she acted like she was okay with it but then humiliates him by lying about their relationship. He wants to get revenge on her so he leaks some of her information and Hope tries to get him back by faking her own disappearance,

Most people assume Tony was involved with or behind Hope’s disappearance; he had to get a lawyer and had to deal with the media and reporters, even when he wasn’t sure if she was really in danger at all. It was frustrating to read because from the beginning Tony suspected that Hope was just pretending to disappear but a big aspect of the story was speculating whether or not she was really kidnapped. We learn that she was later actually kidnapped from where she was hiding because we are shown both Tony and Hope’s perspectives.

Tony is the only person who cares about her enough to really look for her. Hope’s parents are reality TV stars and they were just putting on an act for views and weren’t seriously concerned for her safety, so although Tony and Hope have been fighting for a long time and she’s done horrible things to him Tony is the one who figures out where she is and what’s happening to her.

I strongly disliked the ending because for the final reveal they show Tony about to break into a live show to expose Hope’s parents and tell them what’s going on, but it doesn’t actually show the scene where he exposes everyone on live TV. It’s literally the most important part of the entire story and we only hear about it in summary. Honestly I don’t think that’s not how writing is supposed to work, we had so much build up to this scene only to not even get to see it play out.

Also besides that even the final ending was disappointing because Hope didn’t even show any signs of character development either. So it made it seem like the story didn’t have any major effects on the characters in the end.

Overall I found this book to be very disappointing, especially in the ending so I would not recommend it. It was very confusing at times and even the actual storyline is weird to begin with.