The Shattering By: Kathryn Lasky (Guardians of Ga’Hoole #5)

This book switches the focus of the Guardians of Ga’Hoole series from Soren to his little sister Eglantine. She starts having weird dreams and acting oddly, and no one is entirely sure what’s going on. Until her friend Primrose starts to follow her and find out what’s really happening, Eglantine has been Shattered. 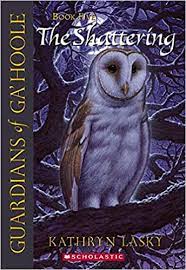 I give this book three stars (out of five). I liked the story and how this book didn’t focus so much on Soren who has been the main character of this series in all the previous books. It wasn’t that bad but it also definitely wasn’t great. For this series I’ve decided to shorten the general length of the plot summaries because there’s 15 books and as I get farther along it will just get harder and more complicated to summarize. So I’m only going to include a short and simplified version of the story, there will be spoilers and I only explain what happens in this book and not any other books in this series.

Eglantine started having weird dreams where her parents were still alive and she was with them. Eventually these dreams lead to something more, she really visits her ‘parents’ in the Beaks and they seem real. But as time goes on it’s clear that something isn’t right. Eglantine has been Shattered, brainwashed by flecks, by an owl named Ginger who was formerly a Pure One. After being rescued she became Eglantine and Primrose’s nestmate and Eglantine’s best friend instead of Primrose, she put flecks in Eglantine’s bedding.

On one of the tricks to visit Eglantine’s Mom Primrose follows her and discovers what the Pure Ones are doing, they’re tricking and manipulating her for information from the Great Tree but she’s captured before she can do anything. However, she was able to use her brain and a small bit of amber to remove the flecks from her nest and pretend to be Shattered in front of the other owls. At the same time Eglantine was starting to realize that something wasn’t right about Nyra, the owl who was pretending to be her mother, and the others at the Tree were noticing their weird behavior.

Nyra had recently laid an egg and was caring for it, for Eglantine and Primrose to escape they had to think fast and avoid getting recaptured by the Pure Ones. In a quick getaway Eglantine stole Nyra’s egg and they flew away together as quickly as possible. They got away by flying into a forest fire that they knew how to fly in and hiding for a while.

All the Pure Ones are Barn owls so the Guardians used their advanced hearing against them, by getting close enough to be heard and spouting misinformation about their troop positions, weapons and more in multiple languages to make the other side think they were outnumbered.

This strategy worked perfectly and the Guardians won, recusing Primrose and Eglantine, devastating Nyra by dropping her egg and getting out of the fire. Back at the tree the Chaw of Chaws are rewarded for their great work and given a new mission, to travel to the Northern Kingdom to learn more and try to recruit help in the next battle against the Pure Ones.

I’ve been meaning to mention Twilight’s singing/battle-chanting for the past few reviews of this series, because they really are something else. It’s really interesting and funny whenever he just starts singing and rhyming in the middle of an intense fight.

I want to comment on the reuse of the concept of brainwashing and pretending to be brainwashed while planning an escape. This has already happened a few times throughout the series, so it makes sense that the characters thought of doing it. However, this idea probably shouldn’t be used on three different occasions and I think it would’ve been more interesting if something else happened here instead of reusing the same concept.

I also wanted to mention the way this book explored the aspect of friendship between Eglantine, Ginger and Primrose. Throughout the book you can clearly see Primrose losing her best friend as Ginger takes over. I personally liked seeing this in this story because as this is a children’s book I like that the friendships and relationships aren’t all always happy or perfect.

Overall, I liked this book. I thought it was another good installment in this series and it was definitely better than the fourth one in my opinion. This series so far is an interesting journey that builds an entirely original world and takes you along with the characters. This is a good book series for young readers but I probably wouldn’t recommend this to older readers.