Danny and Clover are best friends. It’s as simple as that, they’ve always been best friends and they always will be. But when Danny becomes seriously sick, both their lives are changed forever. Clover does everything she can to make him feel better, but no one really knows what’s wrong with him. Together Danny and Clover go on one more adventure, even if it doesn’t end the way they expected. 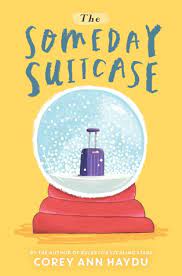 I give this book 3.5 stars (out of five). This book is very well written, with great and compelling characters but it’s incredibly sad, let me explain. The main characters are Danny and Clover, they’re best friends and they’ve always been best friends. They complete each other, Clover’s quiet and Danny’s loud, she makes lists and he makes fun, she loves science and he loves art. To the point where Clover thinks they’re symbiotic, they help and need each other to survive.

But Danny comes down with a mysterious illness that no one can figure out, Clover is desperate to help find out what’s wrong. She’s an observer, she takes notes on Danny whenever she’s with him, looks into his family history and does anything she can to make him feel better. But coincidentally he feels better whenever Clover’s around, she’s magic. After hearing about Somerset Clinic Clover gets set on getting Danny there, even though they live in Florida and it’s in Vermont.

A big thing for Clover and Danny is that they’ve always wanted to see snow, to feel snow, so even if Danny wasn’t going to make it he wanted to travel if it meant he could see the snow.

Clover’s dad is a trucker and she sneaks them in the back of his truck so they can stow away and get to Vermont. But only a little along the way her dad finds them and is obviously very mad and upset, mainly because Danny is very sick and really shouldn’t be traveling especially without his parents permission. But after Danny whispers in his ear (he tells him he knows he isn’t getting better and he wants this last adventure with Clover), he lets them come along.

And eventually they get to Somerset Clinic, with Danny’s parents also coming too. But Danny keeps getting worse, Clover has to stay close all the time and even when he’s with her he doesn’t get that much better. They keep waiting and waiting for it to snow, but it doesn’t and Danny isn’t getting better even though they have a better idea of what’s wrong with him now.

One night, after Clover’s fallen asleep Danny sneaks out of the room and outside, it’s snowing and he just had to see it before he could let go. Danny dies and Clover is devastated, she doesn’t know what to do. But a few months pass and she starts coming to terms with Danny being gone, because she’ll always have some of him with her in her heart. And on a particularly cold February day, it finally snows letting her experience it too.

Overall, I really liked this book although it is sad. I think this book would be better for kids in elementary school or younger kids, but I would still recommend this book to most readers.