The Special Ones By: Em Bailey

The Special Ones are trapped. Ester, Harry, Lucille and Felicity are believed to be immortal beings who live on an isolated farm and still live without electricity and other common things. But they aren’t real, the people who pretend to be them have been kidnapped and forced to play their role and follow a specific set of rules, otherwise they’ll be renewed and another will take their place.

Tess is Ester and she’s been trapped on the farm for ages. But when things start going wrong she is key to helping everyone else, even if it means breaking all the rules. 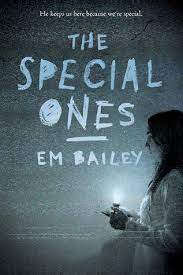 I give this book four stars (out of five). I really loved reading this, it’s incredibly well written and a perfectly terrifying story. The plot surrounds four people who are trapped in a farmhouse in the middle of nowhere being brainwashed into thinking they’re immortal beings called the Special Ones. They’re watched every second of every day and if they don’t act exactly like they’re supposed to they’re ‘renewed’ they leave the farm when ordered by him, the guy who looks over and controls them. Then someone else gets ‘collected’ or kidnapped and is forced into submission to fill in for the person that left.

It’s told from the perspective of one of the girls Tess who is being Ester, there’s also Harry, Lucille and Felicity. They live an odd life, living off the food they grew and their animals, no running water or electricity, except for the chat room. Every night the special ones have a chat session where they answer their followers and viewers questions or requests. He records everything they do and then compiles and edits them, streaming and sharing them on the internet. And although Tess assumes renewal means death he keeps all the renewed girls (there’s only ever been one Harry) in the cellular of an abandoned factory where they make the merch he sells from the Special Ones shop.

Tess knows she’s not Ester but is stuck there living by a certain set of rules, she’s mainly still there because of Harry, not being able to leave and caring for Felicity, who’s only a young girl. The story really starts when they collect a new Lucille and things start to go downhill from there. She’s stubborn, it takes her a long time to cooperate and be who she needs to be but eventually she learns to fill Lucille’s role. But she’s angry at Ester and Harry for bringing her here and trapping her, she holds that resentment against them.

Things are fine for a while, although there’s a drought and lack of water and food for a while and then a devastating storm that destroys most of their food sources. But things really start to go wrong when Harry receives his renewal notice, meaning he’d have to leave the farm and he’s in charge of all their food, by running the farm. Ester and Lucille aren’t even allowed to go into the garden and where the animals are kept. Ester also loves Harry even though they aren’t allowed to look at each other for more than three seconds or ever touch. But she must stay behind and look after the others.

When Harry leaves Ester tries to be optimistic and normal but with Felicity running the farm and still being so young it wasn’t really working. The night after he left, Ester hung back a bit after the chat room and just happened to see one late question, which she believes to be from Harry. They talk every night after the normal session finishes, setting up a rescue plan.

But as the days without Harry drag on Ester falls more and more out of routine, she’s forgetting how to pretend to be Ester. And when Felicity seriously injures her leg and Lucille refuses to help her, Ester has to break major rules to save her life. She not only touches Felicity but gives her stitches, both things she isn’t allowed to do. And inevitably she gets her renewal notice too.

She spends her last few days cooking and preserving food and explaining how to do her tasks to the others, although Lucille seems smug and Felicity is still recovering. When she does leave she finds Harry waiting for her on a motorcycle, he takes her into town and to the police station.

However around this point in the book we get a new perspective, his. He turns out to be a psychopath or just completely insane ( we aren’t fully told), he runs and controls the Special Ones. He truly believes they are immortal beings except he thinks he’s Harry and has been paying the other Harry to fill in his place. However, when he lets the ‘fake’ Harry go he comes back to rescue Ester because he loves her, too.

The rest of the book is the media and police finding the farm house and covering the story. Tess focuses on trying to find the four other missing girls who’ve been ‘renewed’ and him. In the end, the police find the missing girls but he finds Tess again. Harry happens to be with her when he finds her and he shoots Harry, kidnaps her again and takes her to his home, where he tries to kill her and himself by setting the house on fire. But at the last moment Tess manages to break free and survive against all odds, while he is caught and goes to prison.

Tess struggles to move on but eventually does, even after spending two years at the farm. In the very end she’s meeting up with Harry for possibly the last time and dancing in the rain with him, getting ready to leave for college.

Overall I think this book is great, the characters are very layered and real and although the plot is wild, it all makes total sense.