Beth is dead. And although she doesn’t quite know why she’s still here watching over her father and trying to get him to feel better. He’s the only one who can see Beth and everything seems to change when they start investigating a weird case in a small town. 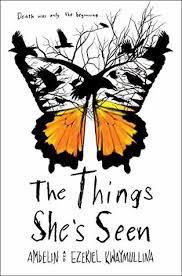 I give this book 3 stars (out of five). This story was very interesting, it had an odd form of storytelling but also a very unique story and message. I found it very entertaining but confusing at times because I didn’t follow some of the magic and imagery. The story is told through both Beth and Isobel Catching point of views.

This story’s main character is Beth, she is dead but still around as a ghost. Only her father can see her and she stayed so she could help him become him again after losing her. He’s a detective and they’re in a small town trying to solve a mystery. But it’s really much bigger than they thought it would be, turns into multiple homicides and a complicated and sad story.

Beth is with him the entire time and they both meet Catching who tells them her story and leads them into solving the crime. By the end of the story Beth is also ready to move on and her Dad is finally okay to live in a world without her in it, he’s still fighting to fix injustice.

They uncovered a big conspiracy but lots of it was really creepy, because real events are told under the guise of the perspective of a horror book. There were also some very interesting ideas and themes about multiple worlds and the after life that I liked being explored here.

Also I always thought the title would’ve been referring to everything that Beth saw while dead but still in the living world, but it actually refers to Catching and everything she’s seen while being able to wander between all the worlds. This subversion of expectations is pretty god damn cool.

I really loved the specific scene where Beth and her Dad are first talking about her moving on, the way she says, “It’s full of colours,” is somehow magical to me and one of the most memorable moments of the entire story.

I really liked Beth’s character and story arc, she was probably my favourite part of the story. Isobel Catching’s sections are told in poetry-like stances with some rhythm or other techniques which make reading them feel quite different compared to the rest of the book and add to the immersion and weirdness of the content of her sections.

It’s really important that aboriginal stories get told and heard, especially since this is by aboriginal authors and tells a story with major characters and themes centering around that. This story showcases lots of the injustices against indigenous peoples and the intergenerational trauma they have and continue to face. These are extremely important messages even regardless of location or country and I’m glad to have the easy access to read them from my local libraries.

Overall I really enjoyed this book despite the extremely scary and sad themes throughout.