Ekata is very excited for her brother to finally become Grand Duke of Kylma Above, simply because it means she’ll be able to leave the palace and study biology at university. She would finally get away from all her siblings frequently trying to murder each other for a better chance at getting the throne. But when something goes wrong and all of her family members are suddenly stuck in a magic induced sleep, she is the only one left awake. Ekata must decide what to do when the position of Grand Duke falls on to her and she has no knowledge of or interest in politics. 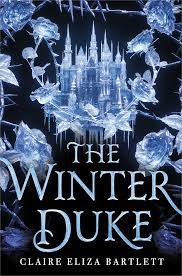 I give this book 3 stars (out of five). This book was quite interesting and honestly far from what I expected from it. Overall I did really like the story but I found the pacing and amount of details throughout to be kind frustrating. To explain why, the majority of the story takes place over just six days. That is over 400 pages (with a pretty typical font size, although different prints and words per page will vary) of not even a week, which goes to show how the story is paced. And that slow pace of story telling generally isn’t really my style or what I prefer, but that isn’t necessarily a bad thing. Also this book outwardly looks like a full on fantasy story, but I found it was more of fantasy combined with politics because lots of the story focuses on the political side of the fictional kingdom the story takes place in.

This story takes place in a very interesting setting, a fictional northern kingdom with direct links to magic and a whole other world Below (because they are allies with a world of underwater creatures beneath the ice their kingdom is built on). The main character Ekata is a member of the royal family but as one of the many royal children, she is nowhere in line for the throne and she doesn’t want it. Her family is the type where the most common interaction between her siblings is attempting to kill each other, so she spends most of her time studying biology instead.

But when her entire family is put under a magical curse in the form of being in an induced sleep and the only person of royal heritage awake is Ekata, she is suddenly thrown into a world of responsibility and having to make decisions and manage things for an entire kingdom. She is extremely unprepared and has to deal with many betrayals and trials that honestly have hardly anything to do with her, besides the fact that she’s the one who ended up in that unfortunate position.

Overall I found that throughout the story it was easy to emphasize and relate to the main character Ekata because at many points she feels lost and confused in an area of politics that she knows nothing about. And as the readers who also might not really know what is going on lots of the time, I found it very easy to relate to her confusion.

Because of the extremely slow pacing throughout the telling of this story, at many times I found it to be really boring and it felt very long. There were points where I considered skimming ahead to see what the next major plot event was, and skip over all the small details in the next relatively meaningless political conversation.

I did like the story, a few of my favourite parts were the relationship between Ekata and Inkar (and honestly I know that I personally liked this romance even more because it was between two female characters and I love representations in all forms of media and fiction, but also because they are so different but they also compliment each other and learn to accept and trust each other despite their differences), Ekata’s interest in biology and her inability to do what people want her to. Many people were telling her “Just marry this powerful man and all your problems will go away” and even when those same people were willing to kill her to get her out of the way, she still held her ground and stood up for her family, she never ran no matter how much easier it would’ve been for her.

Some of the plot twists and betrayals are shocking and I was surprised at various points, however throughout this story there were so many twists and turns of suspicion that when it was finally revealed who had betrayed her and other things it wasn’t quite as impactful. Even when the reveal itself was shocking, because we were expecting some type of reveal it wasn’t as surprising as it would’ve been if there hadn’t been a big set up for it. Overall I did like the plot twists in this story but I do wish they had been down slightly differently so that the reveals weren’t totally expected (not necessarily what they were but that they would be coming at a certain point in the story).

Overall I did enjoy reading this but I would not recommend it to people who really like fast paced and action heavy stories because this particular book is rather slow paced. I did like the plot but I would probably not choose to reread this, other people would probably like or dislike this more but I find this to be interesting yet kind of boring.