These Vengeful Hearts By: Katherine Laurin

Ember Williams wants revenge. At Heller High the notorious secret group The Red Court wreck havoc on everyone, students and teachers alike. Ember is determined to take them down, even if that means joining them and ruining some lives. 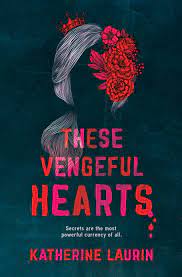 I give this book 3 stars (out of five). This book has a good premise and an interesting story but falls flat on so many details that it adds up to a mediocre book overall.

Ember Williams wants revenge. She has ever since her sister April’s accident years ago, when members of the Red Court went too far and left her paralyzed from the waist down. The Red Court is a secret society at their local high school Heller High, they run on secrets, favours, blackmail and cruelty. They don’t exactly know how to be subtle when it comes to takedowns, humiliation, rigging school elections and even getting teachers fired. The Red Court’s reach is far beyond just their high school, their undercover network of secrets and teams of ruthless girls are capable of pulling major strings and ruining people’s lives.

From the moment Ember enters Heller High she has been secretly molding herself into the perfect recruit for the Red Court with the help of her sister. Eventually she gets her invitation and is initiated into the Red Court by her partner Haley, but it proves to be much more complicated than Ember thought. Not only is she forced to do terrible things but it starts to affect her personal relationships as well.

[Spoiler Warning, skip to the end of the plot summary to avoid them.]

When her mission is to publicly takedown her best friend Gideon Ember is forced to deal with it in her own way, by convincing the person who requested the favour to take it back. And when Ember keeps receiving threatening notes telling her to stay away from Chase, the popular boy she likes, she’s forced to sever ties with him by revealing her spot in the Red Court and how some of her actions were part of Red Court jobs and not genuine.

More and more things from the Red Court seem to personally target Ember and she decides to get to the bottom of it and take down the Red Court once and for all. After she conveniently overhears a conversation between Haley and another member, revealing Haley as the Queen of Hearts. She steals Haley’s phone and finds contacts with all the members of the Red Court’s initials on it, using that information she’s able to make very accurate guesses on who the girls are.

But before she can put that to work Haley comes over to her house unannounced and finds her corkboard with all the information on it, caught in a lie Ember reluctantly explains her reasoning and how she wants to destroy the Red Court. Only for Haley to hit her in the face with the truth, April wasn’t an innocent bystander targeted by the Red Court, she was a member on a job gone wrong and that’s how she got injured.

After that Ember has a bit of a crisis because she’s dedicated years of her life to taking them down for revenge, only to find out her sister was lying to her the entire time. But in the end she still goes through with it and manages to destroy the Red Court with the help of her friends, she makes lists of everything the girls have done and everyone they’re close with. If they don’t willingly leave the Red Court then she’ll expose them and all the members for who they really are and what they’ve done.

This gets all the girls to agree with Ember except for one, Shauna, the girl who’s been threatening Ember over Chase. She is 100% against the idea and would rather continue to rule the school and control all the students. After the official disbandment of the Red Court was announced to the school, at the very end of the book Ember receives a card in her locker informing her of the start of the Black Court.

I really liked that the Red Court was so strong it basically controls the school and everything happening within it, because this raises all the stakes and makes the story intense enough to work. I also love that it’s all girls.

I liked the Red Court’s locker communication system using a deck of cards, it’s very dramatic and it just adds to the intensity and intrigue. I also think it’s funny that technically they could just text all their communication but they don’t because of tradition and since it’s cooler to use the lockers.

I don’t understand how or why Ember tells everyone she knows that she’s a part of a secret organization, it’s a secret for a reason no one is supposed to know your identity. Like I would understand if she only told Gideon but she tells like literally everyone and it’s so frustrating.

While I love the Red Court in theory, this entire plot runs out of a high school where everyone is still a student, they need to do their homework not ruin people’s lives. And it would be cool if they could just do both because they’re super cool, but school work is never mentioned despite it  always taking place in a school. As someone who is a high school student right now, I could not get involved in the Red Court not even because of morals just because I would be too busy being stressed out from school work.

[Spoiler Warning, skip to the last two paragraphs to avoid them.]

I liked both of the plot twists even if I don’t really like what they mean for the story because they were done really well and I couldn’t see them coming. First Haley being Queen of Hearts and April actually being in the Red Court instead of just being a victim.

I absolutely hate the romance between Ember and Chase, it feels so forced and you can tell it was supposed to be a rival-to friend-to lover type trope but it just ended up feeling like a forced subplot. This might just be me hating stereotypical heterosexual romances but, I swear I’ve read this before. This is such a stereotype and cliché that I’m convinced it could’ve been taken straight out of another book and I wouldn’t have even noticed.

The entire plotline where Shauna is threatening and targeting Ember purely because she’s in a relationship with Chase is so boring and annoying, like for once can I have a female antagonist who isn’t motivated by jealousy over the main character’s love interest? Please, this trope is tired. Especially since physically threatens Ember over a boy.

This makes it clear that Shauna has some type of issue and is taking it out on Ember. It’s annoying to see girls hate each other all because of a guy, especially when it’s the kind of thing where they become lifelong enemies sworn to destroy each other. If Shauna was as much of a stalker as she seemed then she would’ve seen that Chase was the one approaching Ember not the other way around. Anyone logical would see that Chase was interested in Ember based on context and their interactions and wouldn’t blame Ember for that. But nope, it’s all Ember’s fault for letting him acknowledge her existence.

Also can we please get over the cliché of the main character getting threats and literally telling nobody about them for the entire story?

My main criticism of this book is that it has a lot of intense build up and hardly any pay off. Ember’s point of view constantly talks about revenge and how she’s going to take the entire Red Court and Queen of Hearts down. But then not only is every mission she does for the Red Court underwhelming but the climax is the most boring, non-confrontational ending I’ve ever seen in a book like this where the entire story is fueled by the main character wanting revenge.

All the missions don’t live up to the expectations that were set up for them, like it only took one photo to ruin people’s lives. Although getting caught breaking into the school was thrilling, it wasn’t enough especially considering it was one of like three high stake moments in this entire book.

For the final takedown Ember doesn’t even do anything to hurt the other members of the Red Court, all she does is threaten to reveal their identities and possibly all the things they did while in the Red Court. And while it is kind of cool that Ember figured out all their identities and got lists of everyone close to them, so she could emotionally blackmail them into quitting; it was not intense enough at all. This was the moment that Ember’s entire journey built up to and it was disappointingly underwhelming.

The final ending is a shameless set up for a sequel that is probably going to be half the quality of this one, the entire ending just seemed like a cop out. You can not convince me that every single girl, including the one with the most power one, just gave up their position and the existence of the most powerful group ever? I don’t see that happening, when joining something like the Red Court you are risking your identity. Joining in itself is a risk and I don’t buy everyone giving up the empire that’s been built and handed down over many years because one girl ordered them to stop.

Some of the girls were already at least somewhat morally opposed to what they were doing. I think if you’re not okay with it then you should try to leave the Red Court, but the entire point is basically to hurt people like why did you join if you weren’t okay with that going into it?

I’m upset that I was promised some intense story of girls manipulating everyone and using secrets to do their thing. I wanted Ember to pull some Mean Girls style stuff and reveal everything about each girl one by one in true Red Court Takedown style, so I was very disappointed.

I found the pacing of the book really slow and boring, it had so much build up I really wish there were more action scenes that could live up to the expectations I had for the ending.