They All Fall Down By: Roxanne St. Claire

Every year, the lives of ten girls at Vienna High are changed forever. The school has a tradition of a Hottie List, which is a list of the most attractive girls. And Kenzie is perplexed when she finds out she’s on it, she isn’t popular and she definitely isn’t the 5th prettiest girl in school.

But when the girls on the list start dying in one accident or another it becomes clear that there’s more to the list than it seems. Kenzie, her best friend Molly and her boyfriend Levi must work together to solve of the mystery and uncover the secrets behind the list.

Warning this does include death, violence and other mature topics. 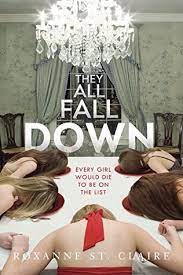 I give this book four stars (out of five). I really liked this book and the concept is amazing. Kenzie Summerall is your average high school latin nerd, with her best friend Molly she’s set to survive high school … until she makes fifth place on the school’s Hottie List. A school tradition going on for years, where the boys vote on the prettiest girls at the school. (Although it seems heteronormative, sexist and misogynistic). Kenzie is perplexed as to why she’s on it, she isn’t the hottest or more popular girl by a long shot and she doesn’t even want to be on the list.

A bit more background information, Kenzie had an older brother but he died a few years ago and because of that her mom is incredibly overprotective of her.

Being on the list isn’t so much an honor but more misfortune when the girls in first and second place on the Hottie List get killed in one or another ‘accident’. Throughout the next few months Kenzie, Molly and Kenzie’s new found bad boy boyfriend Levi frantically try to uncover the secret curse on the Hottie list and figure out why the girls keep dying. It turns out everything is connected to Josh Collier, Kenzie’s once long time crush.

Josh’s grandfather and his dad (who faked his own death and everyone thought was dead) run a secret assassinations society that’s been passed on for two thousand years since Ancient Rome, hence why knowing Latin is so important. Kenzie is number 5 and when her and Molly are rushing to a group meeting of all the girls on the list they find them passed out in a trailer due to poison gas. Molly and Kenzie manage to get all the girls out before the trailer explodes.

But after Kenzie recovers from the blast she can’t find Molly. She runs to her car and opens the driver’s side only to see Jarvis Collier (Josh’s dead dad) holding a knife to Molly’s knocked out throat. He forces her to drive, on the way revealing that he makes the list every year of the most vulnerable and easily controlled girls (choosing Kenzie because of her dead brother, who it’s revealed that they also killed).

Jarvis is planning on faking both their deaths, but when they stop driving Kenzie breaks free and stabs Jarvis in the neck, saving Molly but not killing him. With Jarvis right behind them in the woods at night they have to run through a dangerous obstacle course to get to safety. But when they have to jump down from a platform and Molly goes first by the time Kenzie gets down she’s gone and Kenzie has to figure out what to do alone.

Entering a secret room filled with ancient Roman weapons and artifacts, Kenzie takes a small weapon that makes your legs give out, before she’s confronted by Josh’s grandfather. Who tries to kill her again, telling her Molly and Levi are about to be killed as well and she should just accept her death by jumping into a trap.

But she tricks him and knocks him into the pit, killing him and rushing to help Levi and Molly. She runs into Josh who is really confused when a random guy comes out of nowhere and tries to convince him to force feed Kenzie a poisonous pill. But when Kenzie shouts that he’s actually Josh’s ‘dead’ dad and Jarvis has to admit to killing Josh’s mother Josh snaps and ends up giving him the pill instead. Kenzie then has to rush off and save Levi and Molly, but in the end they all live. After everything that happened FBI officers recruit Josh, Kenzie, Molly and Levi to help find and get rid of the other branches of the secret society around the world, and they agree.

In the plot summary I had to cut out lots of the details and background information, which is why it might be a bit confusing. I totally loved this book, from the very beginning there are so many questions and mysteries and it’s so fun to try and solve them with the characters.