This extraordinary conclusion to the Five Kingdoms series explores time travel in all it’s possible elements as Cole, his friends and many others work together to do the impossible and save the Outskirts.

The Shapecrafters are strong and their leaders are succeeding, they can’t be held back for much longer. Now it’s up to Cole to do all he can to stop of the end of the world and maybe even find a way back home. 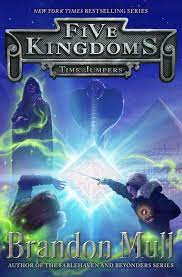 I give this book five stars (out of five). This book is 100% amazing, in my opinion this is one of the best endings of a series that I’ve ever read and it might even be my favourite out of all the Five Kingdoms books.

So much happens in this book, so I’m going to summarize the main events, point out a few of my favourite parts and talk about the one thing I don’t like. Right at the very beginning of the book Cole, Destiny and Honor returned from the Echolands into their physical bodies. They were taken by Enforcers and are brought to Owandell, the leader of Enforcers, some shapecrafters and a loyal servant to Ramarro or Nazeem.

They’re brought before Owandell, but Cole uses his shaping powers to help them break out. The place they’re being held in is under attack. They’re taken to the First Castle, where Cole meets with the High King. He is very, very sick and aging rapidly due to losing his stolen shaping powers.

The King makes Cole his representative and he keeps Destiny and Honor as prisoners. Cole goes to Harmony, the queen for help. He explains the situation and she provides him with help from a young Wayminder. A wayminder is a type of shaper from Creon (the kingdom most of this book takes place in), they can open things called wayports that are portals to other places, times or worlds. Advanced Wayminders can also travel through time and access other worlds (including Earth). Cole’s strong shaping power allows him to connect to, sabotage and change other people’s shaping powers.

[Spoiler warning, skip to the last three paragraphs to avoid them.]

With Cole’s help the wayminder can open wayports anywhere anytime which usually isn’t possible. Using wayports they rescue Mira, Jace and Joe who were still stuck in the Echolands. They go back to Skyport to get another Jumping Sword for Cole, but when they get there they hear about a certain sky castle that has a message for them from one of the dead grand shapers of Necronum (the guy who helped them before and made the skywalls). They decide to visit the castle using wayports, and find the castle was made to cater to Cole’s powers. They get an important message about who to seek out in Creon for help. Then they go get Twitch because it wouldn’t be the last book if Twitch didn’t show up. After that they go to where Cole last met up with Jenna and frees her (she’s no longer a slave, but she still stays there instead of coming with them like Dalton).

Towards the end Cole drinks a potion that allows him to keep living into the most likely future. He faces Ramarro once and when things go wrong, he returns to the time when he drank this potion and now knows how to do things right this time. So Cole visits Trillian the other torivor and gets him to change his memory, so Ramarro who can read minds doesn’t know their plan. But in their fight he still senses that they’re trying to trick him into losing his powers.

Through their preparations and planning for the battle Cole rescued the queen (Harmony), Destiny and Honor who had been taken by Owandell and got Jenna, Dalton and Hunter to join the fight. Cole reconnects Elegance, the oldest of the five lost princesses, with her shaping power during the battle. Her power had taken shape in the form of a giant, time traveling snake, called the Perennial Serpent. With the help of Cole’s power Jenna accesses the Echolands from Creon and Dandalus (the dead grand shaper of Necronom who has helped Cole before) is able to appear physically. Dandalus whispers to Violet and then Cole tells him to go through the wayport Violet opens, so when the time is right he does.

It takes him back to another sky castle made for Cole, Ramarro follows him through and they fight 1v1. But even though the castle is bending to do what Cole wants it to do, Ramarro still has incredible amounts of power. Cole realizes the point of being here, Ramarro can’t escape the castle and eventually it will go through eastern cloud wall and into the vortex, which is like a slipstream and will kill anyone who goes into it with the call of the Other. Ramarro reads Cole’s mind and understands this, to get away instead of Cole reaching out to him, Ramarro reaches out to Cole with his power. Clinging to his power Cole was able to trace it back to the center and attack his power, by attacking Ramarro’s power and using his own power Cole stopped him from leaving.

Eventually the castle reached the cloudwall and they both fell into the vortex, but Cole was saved by Liam (an old friend from the first book) and Cole lived on, saving the Outskirts.

But in the final ending Cole gets Harmony to make Slavery illegal in the Five Kingdoms and all the kids that were kidnapped from his neighborhood are able to return home. Because ever since he came to the Outskirts his main motivation has been trying to get back home, when he has the chance he chooses to return to Earth and forget all about the Outskirts and his life and friends there. Cole became a legend in the Five Kingdoms, in the couple months he was there he helped every princess find their powers and saved the entire Outskirts.

I personally didn’t like the ending. It does make sense though, because ever since Cole came to the Outskirts he was always trying to get home. But even after all his amazing adventures, people he’s helped and friends he’s made he still chooses to go home, knowing he’d forget them all and lose his incredible powers. I don’t know if this is just me but if I had the chance to go to any type of fantasy world, I’d take it. Maybe I’m just crazy, but I think it would also make sense for him to stay in the Outskirts since he was probably the most powerful Shaper there, and he’d learned so much from his time there. After all of that if I was Cole I don’t think I could ever leave, even as a reader I don’t think I would ever want to leave that magical world.

One of my favourite parts, however, is the extent and evolution of Cole’s shaping power. It makes his character stand out even more and I love it so much because at first he’s confused but as his power gets stronger it’s more and more interesting and impactful. There’s also an element of Cole being very extraordinary and important because his power is unlike most others and can span across multiple kingdoms and do things no one else can. This makes certain aspects of the plot a lot more understandable and makes Cole seem even cooler.

Another overall highlight is the phrase, “Die Bravely,” which is a different way of saying ‘good luck’ and originated in the first book but is used throughout the series. I personally really like this, because it kind of represents and explains lots of the stuff in the story and it’s also just an extremely cool thing to say. Especially towards the end of the series and in this book the saying takes on an even more literal meaning and I really liked the inclusion of this detail.

I loved this entire book, my favourite part was the final battle between Cole and Ramarro and the preparations, mainly Cole looking into a hypothetical future which is a really cool concept. Overall, this is a great book and an amazing conclusion to the Five Kingdoms series. I really enjoyed this entire series, although it is meant for younger kids I still love it to this day and will continue to reread it every once in a while for nostalgia and to hear this exceptional story again.