Lara Jean has always been a normal and quiet girl. She’s never had a boyfriend or been the most popular girl in school, and she’s okay with that. But when her secret love letters get sent out and various boys are suddenly able to read her private feelings everything spirals out of control.

Lara Jean is panicked and doesn’t really know what to do, and that’s where Peter Kavinsky comes in. They agree to pretend to be in a relationship to make other people jealous. But how can they tell what’s fake when real feelings get thrown into the mix? 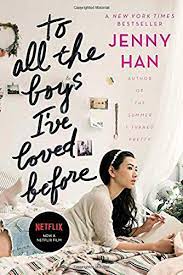 I give this book stars three (out of five). The reason I decided to read this book was because of how popular the story was with the movies on Netflix. Many people thought it was a typical cringey teen romance movie but others thought it was really good. I wanted to check it out to see for myself, and in my opinion it falls more into the type of “romance” where half the time you’re very confused. Honestly my favourite part of this entire book was a background character and I was confused by the main character Lara Jean and her actions.

Lara Jean is starting her junior year and she’s very close with her two sisters, Margot who’s older and Kitty, younger. Her older sister is leaving for university abroad so Lara Jean needs to step up and start taking on more responsibilities because she has a single dad, who has to work a lot to support their family. The main story starts when all the love letters Lara Jean has ever written to various boys mysteriously get sent out, this includes a few people from her school that she used to be friends with in middle school, and namely the boy next door named Josh who was dating Margot for a long time and one of the most popular kids in their school, Peter.

To get out of having to talk with Josh Lara Jean randomly kissed Peter in the hallway and eventually they came to an agreement, to pretend to be dating. So that Lara Jean could make Josh jealous and Peter could make his ex-girlfriend Genevieve jealous. But you all know what happens when two characters pretend to be dating. As you could probably guess because they spent a lot more time together and actually got to know each other, they both started having some feelings for the other. Lara Jean sort of forgot about Josh and Peter was more focused on her then Genevieve. There’s also a period of time when they’re both confused on what is real and what is just a part of their fake relationship.

Their plan worked because it made Josh jealous, jealous enough to admit that if Lara Jean had told him she liked him sooner things might’ve been different and even enough to kiss her. Lara Jean doesn’t really know what to do, she doesn’t even really like Josh anymore and she’s still in a fake, possibly real relationship with Peter.

Until they go on a ski trip right before winter break with their school, while they’re there they get into a fight. Peter confesses to thinking he was starting to like her but Lara Jean is convinced that he’s still in love with Genevieve so she doesn’t accept it. Later that night she’s had some time to think about it and she decides she needs to fix things with Peter before the moment is over and she can’t go back.

So, she decides to go down to the hot tub where she meets Peter, he wasn’t expecting her there but when she confesses that she likes him too and starts kissing him in the hot tub he doesn’t complain. The problem is that the next morning everyone thinks they had sex in the hot tub, when in reality they only made out. This wasn’t a very big deal for Peter, he’s already known as a player so he wasn’t very affected, but it was a very big deal for Lara Jean. She’s a very good girl, until her fake relationship with Peter she’d never even had a boyfriend. So, now that everyone is calling her a slut , easy and she’s getting made fun of and hated, Peter had absolutely no consequences. {This is clearly an example of gender based double standards.}

After that they didn’t talk over Winter break, hardly at all until Peter randomly shows up at a Christmas party hosted by Lara Jean’s family, but Josh is also there and there is a lot of conflict. Josh and Peter get into a fight and Margot overhears and gets really upset because Josh kissed Lara Jean, but she’s mainly mad at her. Margot and Lara Jean eventually work things out after Lara Jean explains everything and they both acknowledge how much they need and rely on each other.

It’s revealed on New Years that Kitty is the one who sent out Lara Jean’s letters, which was the cause for all the chaos within this story. The book ends with Lara Jean writing another love letter to Peter, this time that she intends to send herself.

First of all, I want to point out that the line, “Why is it so hard to say no to him? Is this what it’s like to be in love with somebody,” is so concerning, especially since young girls are the target demographic for this book and lots of people read it. I think this message is concerning and potentially dangerous, it’s spreading the message that when you love someone you should do what they want even if you’re not comfortable with it. And that it being very hard to refuse something is normal in healthy relationships, which it shouldn’t be. If you find it very difficult to say no to your partner that can be a sign of abuse or a power imbalance, which is not good.

I really didn’t like Peter’s character, in my opinion he was terrible, selfish and I don’t see how anyone could like him. He has a few redeemable moments but besides that he didn’t seem like a good person. He didn’t do much of anything to help Lara Jean and he just expected her to fall in love with him instantly, he was extremely hurt when she said he wasn’t perfect and I don’t think he was as amazing as Lara Jean thought he was.

There were lots of unique characters, like Lara Jean because most teenage girls aren’t into scrapbooking, stationary or antiques. There were also some good parts but overall I liked background characters and plot lines more than the main romance and focus of the story.

Kitty was the best, Lara Jean’s little sister Kitty was 100% not only the best character but also my favourite part of this book. I have to say she was very well written and realistic, she seemed totally like a real child and she was fun to read about.

One thing that didn’t really make sense to me was the conflict between Margot and Lara Jean, because at the Christmas party Margot overhears Peter saying that Josh tried to kiss Lara Jean and then she immediately blames her. In that situation when all she heard was that Josh tried to kiss her it doesn’t make sense to blame or get mad at Lara Jean. And in reality even with full context Lara Jean wasn’t expecting Josh to kiss her and she didn’t want or ask for it. When someone kisses you randomly you typically aren’t to blame for it, which is why I found it confusing that Margot got mad at her sister right away. I understand that she wasn’t mad at Josh because she values her relationship with her sister more but also that wasn’t really Lara Jean’s fault, so it’s just a big mess.

Anyways, to me this really was the stereotypical cringey romance story I was half expecting. It wasn’t as bad as I thought it could be, but it wasn’t great either. I did enjoy reading it but that was because I was aware of how the story wasn’t very logical and things happened just for the sake of the drama. I’ll also be reading the rest of the series, so you can also find what I think of those on this website.