It was just like any other day, until it started sowing and didn’t stopped. Scotty Weems and his friends Jason and Pete stayed at school after they were let out early. But when they try to leave no one can get to them because of the snow and no one knows they’re still there. Along with four other students and one teacher they’re forced to survive being trapped in their school or find a way out. 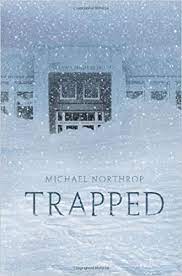 I give this 3.5 stars (out of five). This book is a great read! I really enjoyed reading this, although it’s shorter than most books I read and there was more foreshadowing in the first few chapters than necessary. Anyway, moving on to a quick summary of the plot before I get into specific things.

This book is about Scotty Weems, a sophomore at Tattawa High school. Him along with his two best friends (Pete and Jason) end up stuck at school with four other students during a massive snow storm. School is let out early but having nothing else to do Scotty, Pete and Jason get permission to stay behind and work on their woodshop projects.

However, a few hours later when they headed over to where kids wait for rides there were still five people there. The school was isolated from any town within a few miles and due to the snow, the roads were so bad the people who already left probably wouldn’t have made it home. There was one teacher (Mr. Gossell) , two girls (Kristy and Julie) and two (weird) guys (named Les and Elijah).

But when it was around 5pm and no one had showed up, they started getting anxious. Due to the school’s location and the heavy snow there was no signal and no one could text or call their parents. After a few hours they thought they saw a car and Mr. Gossell went to get help, but he never came back.

[Major spoilers beyond this point, skip to the last paragraph to avoid them]

Soon after Mr. Gossell leaves the power goes out. They use light from the windows and their phones to get to their lockers and gather everything that might be useful (clothing, food, flashlights, etc). They sleep there and the snow has completely covered the windows when they wake up. They use tools from the woodshop to break into the cafeteria for food and other rooms for more supplies (blankets, an old radio and a few sheets as there weren’t enough blankets for everyone).

They spend about four days trapped there, barely seeing or hearing anything from the outside world. Eating food they found in the cafeteria, making a small fire with wood and other materials from the woodshop, sleeping on the floor in a classroom and overall just living in the school. Until Pete decides to go out and look for help, at least try to get to the nearest town or houses where he can tell people where the others are, since nobody knows that they’re still at the school and even on the second floor the snow is almost covering the windows.

They can’t even see the roads and all the one-story houses are buried under snow. This would be a dumb decision but Jason had been working on a go-cart turned snowmobile that had a engine and everything. They spent a lot of time first arguing and then trying to find the best angle and position for it. It looked like it was successful at first until it crashed, the nose pointed into the snow and it flipped. From what they could see Pete didn’t get out from under the snowmobile. Everyone was panicking, Scotty more than anyone else.

While everyone else was freaking out, he quietly left and rushed through the pitch black hallways to the woodshop. Grabbing and finishing his project; Snowshoes. Although simple and poorly designed they would have to do. It took him maybe an hour to finish the snowshoes and go back upstairs. He leaves through the window and no one tries to stop him. His snowshoes work well enough that he can keep walking without sinking but not well enough that snow doesn’t stick to them (so as he walks more and more snow gets stuck on each shoe, so it’s getting harder for him to walk).

He eventually reaches Pete maybe a bit over half a mile away, but without looking too closely Scotty could tell he was dead. He sat there for a while, thinking. He could turn around and head back to the school, but he might not make it and even if he did he would still be stuck in the school. He could stay there and most likely die from the cold, or he could keep walking down where the road should be and hope he makes it to town before dark.

Making his decision he gets up and starts walking toward where the nearest power station would be but eventually ends up just walking along the road leading into the town centre (with a few shops and houses). However, he can’t keep walking, after a while of only being able to take steps minutes apart he passes out. He thought he was dead but he wasn’t, in fact he got picked up by a helicopter for the National Guard. In which after he regained consciousness he informed the sergeant of the five remaining kids still stuck at Tattawa high school and they went to go pick them up. And that’s the end of the story.

So, first off with the ending I was actually really surprised that the majority of people lived, I was expecting more extremes due to the large amount of foreshadowing. Also, I realized that Scotty is kind of the hero, since he went out to check on and hopefully bring Pete back but he ended up saving them all. And knowing the characters, I think they all assumed that Pete and Scotty were just dead and they were down two people. I really like the ending though, I actually thought that they weren’t going to get rescued or at least I had no idea how they would get out.

Another thing I really liked about this book is that on each page at the start of every chapter the background showed how much snow there was. It started small and gradually grew until the entire page was just white. It’s a good way to see how much snow they got in between chapters. Overall I really enjoyed reading this book and it also brings attention to why preparing for emergency situations is necessary and helpful.