Sometimes the safest place to be is underwater, or at least that’s what Morgan thinks. After surviving a school shooting and witnessing things she can’t forget, she has extreme anxiety and hardly ever leaves her house. But she can’t stay inside forever, even if that’s the only place she feels safe, she still has to push herself and go outside. 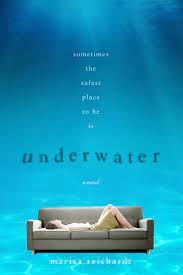 I give this book 3.5 stars (out of five). I really liked this book. I think it has great descriptions, especially of how the main character, Morgan, feels. Morgan can’t leave her apartment, after a school shooting leaves her scared of the world. Morgan also holds extra guilt for being partially involved in the school shooting unknowingly, because on the day of the shooting it happened to be raining and she gave the shooter a ride to school.

[Spoiler warning, skip the next paragraph to avoid them]

Throughout the course of the book that takes place over one year Morgan learns to leave her house and not be afraid of the world anymore. Even though it takes hard work and determination, with help from the new boy next door Evan and Brenda (her psychiatrist) Morgan manages to make it back out into the world by the next summer.

It’s a really emotional story and is probably triggering for some people. However, I thought it was really good and did a great job of portraying how people are affected by traumatic events and how that affects the people around them too. I think it’s really well written and although I think we need to make changes to prevent school shootings everywhere, this book brings awareness to this topic and explains how they can seriously affect people even those who aren’t injured or killed.