This is the story of the end of the world, but not just once. When humans make a mistake and aliens start to invade Earth, seventeen year old Sara is suddenly thrown into a status of responsibility. From an alien ally she is given the ability is rewind time and redo the day of the invasion many times to get it right. But when the alien can’t keep helping her and things won’t stop going wrong, can Sara still do what’s right and save the world? 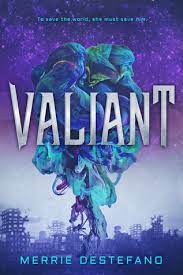 I give this book 2.5 stars (out of five). I enjoyed reading this, but lots of things happen throughout the story but they all really amount to nothing, although the writing is good and I love the characters it seems relatively drawn out and repetitive at times.

This is only the beginning of the story, when I first read this book the sequel hadn’t been released yet so only a few questions got answered in this book, even in the end of the book there’s so much we don’t understand.

It centers around Sara, an average seventeen year old girl, her friends and her little brother in a dystopian future. Not only has the world gone to shambles in this future but a last attempt from the failing American Government to collect resources from another planet sparks an alien invasion. For a still unknown reason the only way to save the world is to keep Gabe, Sara’s little brother alive.

Sara meets a friendly alien working with the resistance, they let Sara travel through time to save him but on the 14th try the helping alien gets captured or killed and Sara only has one last try.

Throughout the rest of the entire story Sara tries to keep all her friends and her brother alive, only slightly succeeding. But even by the end, after fighting hard battles, time traveling a lot and mostly surviving, they still have a very limited idea of what’s going on.

Overall I really liked the characters and general theme and storyline, I just hope more explanation happens in the upcoming sequel.

After looking more into this series and author I have found that there are a few extras, including a novella sequel called Taken which I haven’t read yet and a short story prequel called Jumpstart according to Merrie Destefano’s website. Taken is about what happens next as Sara continues trying to save the world from the aliens invading Earth and Jumpstart is the story of Sara trying to go back in time to stop the invasion from starting. And there might be more releases in this series in the future.

Currently I have not read either of these, I’m having some trouble finding them but I do intend on reading them at some point in the future and when I do I will post the reviews on this site.