We Are The Ants By: Shaun David Hutchinson

If you had the chance to stop the world from ending would you take it? That might seem like an easy question, but when Henry Denton has lost all the good things in his life he isn’t sure what his answer is. He knows how bad the world is, wouldn’t he be doing everyone a favour by not saving the planet?

For years Henry has been abducted by aliens on a normal basis, but no one believes him. And when they present him with a button that could either stop the end of the world, he doesn’t know what to do. This is the story of Henry finding his answer and outlook on life. 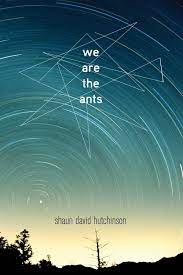 I give this book five stars (out of five). I love this book, I think it’s very, very well written and has an amazing plot and characters. The book is really, really sad and right from the first page it makes you question your existence and place in the universe. It makes you wonder if our lives are worth it, only to convince you that we do matter (sort of) and you deserve to want to live.

The story follows Henry Denton and his quest to determine whether or not to press the button that’ll stop the world from ending on January 29th, 2016. For some context, Henry’s mental health has been steadily declining ever since his father left, his brother’s bullying and mother’s alcoholism and smoking problem also greatly contributed. But he was starting to feel better, maybe even happy with his best friend Audrey and boyfriend Jesse until suddenly, seemingly out of nowhere Jesse commits suicide and Audrey leaves him as well. Within a week Henry’s lost everything he has, it leaves him thinking there’s no point anymore.

Right now we have Henry’s emotional backstory, we have to go back again and give Henry’s astronomical history. Henry was first abducted by aliens when he was thirteen, he never knows why but the aliens he’s named the Sluggers take him every few weeks or months whenever he’s alone. They take him on what he imagines is their spaceship and perform varying tests and experiments, and randomly drop him back on earth, almost always completely or mostly naked.
At school Henry is widely known as ‘Space Boy’ because his brother told everyone that Henry said he was being abducted by aliens and everyone made fun of him and bullied him.

The first main plot point is when Henry’s abducted by the Sluggers but this time they try to communicate with him, they put a big red button in front of him and a projection of the earth. If he doesn’t press it he experiences different bad sensations and pain, but when he finally does press it he feels great. The Sluggers communicate that the Earth is gonna get destroyed but they can stop it, if he presses the button. He has 144 days to decide whether or not to save the world.

And that’s Henry’s life hiding in his room and avoiding his family, getting abducted every now and then, getting bullied at school, sneaking around with Marcus to fill the void left by Jesse and trying to decide if humanity is worth it or if by not pressing the button he’d be doing everyone a favor.

Until he meets this new student Diego, and they gradually become friends. And his brother and his girlfriend announce they’re pregnant, which obviously contributes a lot to Henry’s decision and thinking. Would it be cruel to let a new baby be born into such a terrible world?

[Major spoiler warning, in this review I cover the entire ending and all the reveals. To avoid that please skip to the two last paragraphs]

Marcus has a party and Henry’s abducted again, Diego and Henry go to the beach and have intimate talks and more school days pass. Until one day, after gym class while Henry is showering three students dressed as aliens (because space boy) jump him, tie him up and assault him for the fun of it. Even when he was found Henry didn’t want to make a big deal of it, or get the police involved, although that was kind of necessary in his situation. A video and pictures of the assault went viral all over the internet around their school.

After coming home, Henry is abducted again and this time led to some kind of room or box with no visible walls or floor in space, where he gets a full view of space and all the stars. It’s beautiful but he’s never felt so small. Back on Earth, Henry, Diego and Audrey ditch school and go to the fair. Now this seems relatively normal but is a big deal and Henry and Audrey end up talking a lot about Jesse. Henry finds out Audrey also blamed herself and instead of going on vacation and never talking to him like he thought, she checked herself into a mental hospital and got better.

Over the next few months Henry reconnects with Audrey, gets some closure for Jesse and gets closer and closer with Diego. Things are going good for Henry. Until Zooey, Charlie’s girlfriend (Henry’s brother’s girlfriend) miscarries on New years. And Henry and Diego break up, even though they were never officially together. Henry came to the conclusion of wanting to press the button for all the other good people, “they deserve to live even if I don’t.”

In an interesting climax Audrey convinces Henry to go to the school’s winter fair, where he sees Diego’s absolutely beautiful painting of him, Diego’s an artist and his art shows how he views Henry. But Henry didn’t agree with it, saying ‘That’s not me.” and leaving. He ended up on the bleachers crying alone … until Marcus shows up… and nearly rapes him. And when Diego found out, hands were thrown.

The rest of the book is Henry’s recovery not just from being attacked but with his mental health too. He checks into a mental hospital and finally gets the professional help and support he needs. He also reunites with Diego and Audrey, makes peace with Jesse and his family, and by the end he honestly and truly wants to press the button.

The book ends a few hours before January 29th, the Sluggers haven’t abducted him in a while but he’d press it if he had the chance. The last lines of the story are,   “What do you think is going to happen?”
I’d imagined dozens of ways the world could end, but I still wasn’t any closer to an answer. I watched the sky and wondered where the Sluggers were. Why hadn’t they given me another opportunity to press the button and whether they were ever real at all. I didn’t know if the world was going to end tomorrow, nor did I care.
“Honestly? It doesn’t matter.”

And it was just an amazing and incredible conclusion to an amazing book. This ending really shows how Henry’s world views and mental health changed throughout the story and how much he’s grown.

One of my favourite things about this book is that between every few chapters there’s increasingly creative ways that the world could end, ranging from nuclear war to tiny robots causing an apocalypse to just CTRL-ALT-DELETING the planet to ‘Bees?’. Another of my favourite things in this book is just the line, “F*ck it. Let the world burn.” Which seems very powerful to me, and is probably something that lots of people have thought or felt at times.

I also love the characters and the overall message, that even if you don’t necessarily matter in the sense of the entire universe, you always matter to other people, you matter. The world is always worth saving, that’s something everyone should know and agree with, even when it doesn’t seem like it. Anyway, this is one of my favourite books ever and I really, really recommend it.