What Kind of Girl By: Alyssa Sheinmel

‘What Kind of Girl’ explores femininity and how people react to different types of girls, whether that’s domestic abuse survivors, girls with eating disorders or other mental illnesses, or lesbians. Girls and women are always exposed to the pressure, expectations and perceptions of everyone around us. How does that impact who we are and how we act? 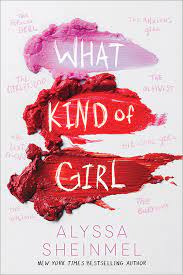 I give this book 2.5 stars (out of five).  This was an interesting and questionably empowering story but it also definitely has extremely messed up plot lines and I hate it most of the time. Including things like minimizing the effects of violence on women and focusing on protecting their abusers, people not believing the victim, and people blaming the victim. This book has many scenes with extremely problematic behaviour and dialogue.

Thankfully there was a content/trigger warning at the beginning and resources available at the end, but that’s kind of an expectation for a book that covers so many majorly controversial and important topics shamelessly.

This entire story is just the aftermath of the main character Maya coming forward against her abusive boyfriend Mike and the school being divided between people who believe the victim and people who want to keep believing Mike is the school’s perfect golden boy. The other half follows Junie or June and her personal journey with anxiety, OCD, self harm, her girlfriend and her often overbearing parents.

The way this book is formatted with point of view changes almost every chapter was extremely confusing and greatly caused my initial struggle to understand the plot. Because the chapters are introduced with things like, ‘The Victim’ ‘The Popular Girl’ or ‘The Bulimic’ but not their names (at least for the first part of the book). This made me think I was reading about way more different characters than I actually was. I got the message that girls can’t be explained in one word/label but it was not worth the confusion to convey that message.

This book does include major LGBTQ+ characters whose sexualities aren’t their entire personalities but there’s still subtle homophobia. The worldview that some of the characters in here shocked me, even within fiction the fact that some people can blame women for the victim men inflict on them is beyond me.

Because this book was full of problematic and confusing moments I want to talk about a few of them that stood out to me a lot. [Contains Spoilers and won’t fully make sense if you haven’t read the book, skip to the last paragraph to avoid them.]

A character said: “Even if he did hurt her- bruises heal, but college debt can last a lifetime.” And my response is so does trauma, experiencing domestic violence is so much more and should not be compared to a financial cost. It’s ludicrous that people thought Maya was the one doing more harm to him.

Maya ate ham even though she’s Jewish because she was compelled to by Mike’s family, if he was a good boyfriend he would’ve known and should never put her in that position.

People made a million excuses to get the blame off Mike, like family history, mental illness or literally anything to stop him from seeming like a bad person and abuser even though that’s what he did and nothing can excuse that.

At some point Maya realizes that during her relationship Mike twisted everything and fit her into what he wanted for his future and called it their plans, even though he never asked her or included what she wanted into those plans.

There’s a scene in which Junie’s girlfriend Tess breaks up with her because she didn’t hear the news about Mike yet and was going to sit with him like usual. It’s so painful because it’s very obvious that Junie has no clue what’s going on and Tess doesn’t even give one breath of explanation. I feel so bad for Junie especially because she was already feeling terrible with her anxiety and ODC and Tess just broke up with her in front of everyone.

The entire scene in which Junie finally confronts her father is both satisfying and makes me want to punch a wall. He never really saw her at all, just saw the person he wanted her to be and when he thought she was living up to that expectation he was so happy that he literally couldn’t even see her crying in front of him. Hearing him call her panic attack a ‘setback’ pissed me off, him suggesting yoga as a different coping mechanism to cutting and so many other things just make me thankful I have parents who understand.

Seeing Junie tell him the truth even when she wasn’t sure if he would love the real her, it’s just frustrating that it took so long for him to listen to her. She is a perfect example of a teenager who was scared to ask for help from her parents, not even because they were abusive or unsupportive but because she was scared they wouldn’t love her if she needed the help.

Towards the end of the book Junie stops hiding herself, she realizes that she can be a successful activist and have anxiety she doesn’t have to pick one or the other. She can be strong sometimes and vulnerable others, she is just herself and she doesn’t have to pick and choose who it’s acceptable for her to be. I personally really liked seeing Junie’s journey towards this idea of self acceptance and I found her ending to be very satisfying.

When Junie is finally able to tell Tess the truth about her anxiety and OCD it’s a big moment because she used to hide it from everyone, so it showed a lot of character development and was a very well written scene.

In light of all the difficult topics and themes there was a funny moment where Junie accidentally admitted to sneaking out when her parents didn’t know because she forgot they didn’t know about it.

Overall I think this book was very thought provoking but about half the time those were outraged thoughts over the victim-blaming and bad parenting throughout the story. I don’t regret reading it and I think it did have good and redeeming aspects but there were so many extreme moments that I just can’t forget.