When the World Didn’t End By: Caroline Kaufman

This is Caroline Kaufman’s second book of poetry.

Trigger Warning (for the book not discussed in this review): Mental Illness, Abusive Relationships, Self-Harm and Sexual Violence. 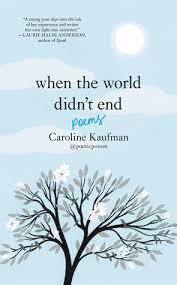 I give this book 3 stars (out of five). First of all, objectively I do not know what I’m talking about when it comes to poetry. I have about as good as a middle school education on poetry and I never took it very seriously personally, because I’ve never read a lot of it. I’m just saying that I’m basing most of my comments on a less than sturdy idea of poetry as a form of writing.

I read Caroline Kaufman’s first poetry book Light Filters In and I really liked it. I remember it because I kept wanting to save the poems so I could remember them later. I still don’t think I have a very good understanding of poetry so everything I’m going to say comes from the place of a (possibly clueless) teen reader.

This book is divided into three sections; What Was, What Could Have Been and What Became. The author writes about a lot of personal experiences and trauma in her poetry which is very clear in her work, because she is clearly self aware of how poetry impacts her and how her work draws from  things in her life. This is a central theme and it appears in many different poems.

There’s also a theme of the world ending, how people tried to prepare for it, felt about it happening, and what changed when the world didn’t end. This is what the book is named after but it isn’t the most recurring theme throughout the book, it is almost the connection that brings the separate other pieces together, it’s coherent and it makes sense organizationally. But it’s also very good in the functions of the poems on this topic and their message individually, apart from the other poems too.

There are poems that seem to be connected or carry on through multiple poems, one of these follows the author as she grows up, the idea of growing up is also shown throughout the book. Another one is’ A Dream About You’ which has multiple parts, and  ‘Alternate Universe in which I never found poetry after Heidi Wong’ which has 10 parts. Another one of these is The Seven Deadly Sins, which has a poem for each. There are a few more but these are the ones that stood out to me.

My favourite poem is one of those; Pride mainly because of the lines, “I do not change the pronouns when I write about her.” This is a small thing, it isn’t a law being passed, it isn’t some revolutionary act of pride. But it’s still so important because we can’t be genuine if we can’t even use the right pronouns since some people think that changes everything. I think it’s honestly sad that this is an act of pride, because in an ideal world this never would’ve even been a thing. I’m so glad that now people can use the right pronouns without major repercussions because this is what people should see, romance between people of any gender identity should be considered normal. This line spoke to me more personally because I wasn’t able to fully relate or understand the experiences Kaufman details in other poems; this is something I know about, even as a teenager. And it’s something I want to be able to be proud of too, without it having any relation to sinning.

One of my only critics is that this needs to have a trigger warning, nothing is stated 100% outright but there are many topics like mental illness, self harm, sexual violence and abusive relationships that are explored and discussed in the poems. I think trigger warnings should always be included even in books and other printed media, and I think that especially because this author also has a platform on Instagram @poeticpoison that I would have been really happy to see at least some form of indication because trigger warnings are a lot more common online.

I also liked how the illustrations were minimalist and how they played into some of the themes, especially for the start of the sections and the development in the images as well as the written content and story. Also I liked how some of the poems had titles and others didn’t, I don’t think I’ve seen many titles for individual poems in books of poetry like this so I liked this detail. Overall I really liked this book.