When We were Magic By: Sarah Gailey

Alexis, Iris, Paulie, Roya, Marcelina and Maryam have been best friends for years, they bonded over a secret they all share; they’re magic. But their friendship will be tested when Alexis makes a mistake… that might have killed Josh Harper. 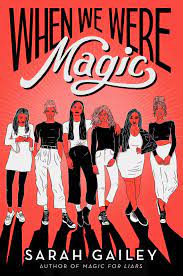 I give this book 4 stars (out of five). I really liked this book and it’s unarguably unique take on magic. It wasn’t entirely perfect but it has pretty much everything I’m looking for in a novel: a great cast of diverse main characters, a driving force moving the plot along, magic and romance. It’s got a little of everything from slumber parties to disposing of body parts and all with a hint of magic.

Alexis and her best friends have always been magic, they don’t know why and there’s no way to describe it exactly, but they’re magic. So when Alexis accidentally kills a boy named Josh with an unexpected and uncontrollable burst of magic, they’re committed to helping her fix it. But the spell they do doesn’t entirely work and Josh’s body is split into limbs and organs, and they decide to hide the body parts separately. The rest of the story follows them as they start disposing of all the pieces, but one by one as they hide the body they start losing parts of themselves.

For a long time while I was reading I was worried that the girls would lose their powers and abilities because of the title. To me it implied that there would be a time when they weren’t magic, and since it was such a big part of who they are and their friendship I didn’t want to see that.

I really liked the way magic was described, it’s kind of abstract but it’s also so much a part of the girls. I liked how they were constantly discovering new things they could do and testing their boundaries, and how even when they all had similar magic they specialized in different areas and were able to do different things. Like Marcelina’s connection with plants, Alexis’s with animals and all the girl’s different abilities.

For Alexis I liked how it showed the consciousness or thoughts of animals, specifically dogs because it’s like exactly what you would imagine a boy would think about: sniff, good friend, good smell, outside? It’s really cute.

I loved that right from the very beginning of the story everyone understood that Maryam couldn’t be a part of what they were doing (covering up a murder) and they let her go. It didn’t make her any less a part of the group but it was just how things needed to be, they all knew that if she was discovered with the dead body she would be treated differently and worse, so from the start When We Were Magic isn’t afraid to talk about real issues even within this fictional universe.

I can definitely see this book getting negative comments from cishet (cisgender/heterosexual) people who are mad that there’s so many LGBTQ+ characters. Alexis, the main character, isn’t straight, she has two Dads and many of the other girls like Paulie and Roya aren’t straight either. But I’m always thankful for representation especially when it’s done right like it is here. There’s also main characters from various races, religions and cultures.

Alexis isn’t straight, she doesn’t know the word for what she is but she isn’t straight. It’s said that bisexual is probably the closest thing to what she feels, so I think if Alexis wanted to find a label it might be pansexual or omnisexual, but it’s also great to be undefined. Something that I love about this book is that it goes beyond gay, straight and bi. So many books, even ones that feature prominent LGBTQ+ main characters, don’t explore queerness or even diverse identities within the community, so I’m very glad that this doesn’t put a label on Alexis’s sexuality and also briefly explores other gender identities too.

[Spoiler Warning, there are minor spoilers throughout the rest of this review. Read at your own risk.]

The romance between Alexis and Roya was very well done, they take the friends to lovers trope very seriously and have years of longing between them. It was really nice to see them getting together even if they both made mistakes along the way. Within the first chapter I got vibes that Alexis might like Roya but I thought I was just being queerly-optimistic and I’m very glad I was proven wrong.

At one point Alexis gets one of her Dad’s coming out stories and it’s very complicated because it shows how at the time his mom said “I still love you, no matter what.” Which made him feel like she was saying that she’d love him despite him being gay, despite who he was. But later after she died he read her journals and found out that she didn’t know what was the right thing to say, but she just wanted him to know that even if she got things wrong or didn’t always understand she’d still love him and be there for him. He’s trying to do the same thing for Alexis even if he doesn’t know what she isn’t telling him. The scene where Alexis first shows her Dad her magic is very special, Alexis shows him some magic and he has a pretty understandable but still good reaction.

I also really liked Alexis’s perspective and her uncontrollable magic that spiraled out of control when she was stressed and led to hurting herself or the people around her. This leads to an even more complex situation where Alexis is worried about getting too close or lying to people in case she accidentally hurts them.

Alexis and the other girls have such a strong friendship and Alexis struggles a lot with letting them take on the burden of covering up a murder for her, even without the added complication of magically losing parts of themselves. But her friendships are secure and at one point Alexis realizes that (specifically Maryam) would never leave her over a guy, even a dead one (pg. 97). I think this is mentioning the trope of girls losing friends because they fought over guys or things like that, and this highlights how their friendship is still strong even though it’s under very different circumstances.

Alexis’s main issue throughout this story is accepting her friend’s love, help and support even when she doesn’t think she deserves it. There were times when over characters had to confront her about this because of her way of thinking, while she was trying to be empathetic she was putting them in a worse position and constantly apologizing but not necessarily making things better. Towards the end she starts to get it more and instead of a apologizing, she starts thanking her friends for being there and literally covering up a murder for her.

I think that all the girls lost very interesting things like the ability to dream, cry, remember, or forget. Iris loses her freckles and the ability to see her magic, and I think it was Paulie who lost the colour green. These all seem like relatively small things to lose on their own but they’re all very significant to the people losing them.

Iris loses her freckles which is a big deal because they’re her favourite thing about herself. As someone who was also blessed with freckles I wanted to think about how it would affect me if I lost mine. It’s weird to think about and hard to imagine, especially since I’ve obviously never seen myself without freckles. The closest I’ve ever come is wearing a lot of makeup that covers them up. My freckles are also my favourite physical feature so it would probably be a similar shock to what Iris felt, but I think I could get over it relatively easily even if my appearance was permanently changed. But I would be really upset, especially because there’s no way to go back.

(Random side note: There’s lots of filters that can give people freckles, someone should make one that takes away your freckles and shows you what you’d look like without them. I think that would be interesting for people with freckles, like me.)

I liked Gina and how she was a background character until the very end when it’s revealed that she’s also magic like them. Alexis and the others kind of view her as a threat because she knows too much about them for most of the story, but I think it gives them even more perspective and information. And even if Gina wasn’t a part of their friend group for a long time she’s still included and welcomed once they figure it out, which is very cool.

I really like the message, “It’s okay to be upset at upsetting things.” A large part of this story focuses on trying to stick together even when they’re not okay and being not okay together. Sometimes it’s hard to let yourself be upset even when it’s justified, just like it’s hard to be honest when someone asks if you’re okay.

I also really like that all the main characters have unique names.

Overall I loved this book and I think it explored some really interesting themes and is a great example of how to have diverse characters with good representation.