‘White Rabbit’ is the story of one crazy night and all the things that happened, the lives lost and the lies told. It’s an in depth murder mystery with many twists and turns until the final reveal. With compelling characters and tensions high throughout the story, will the main characters (Rufus and Sebastian) solve the mystery, survive long enough to tell everyone what really happened and ever sort out the lost feelings between them? 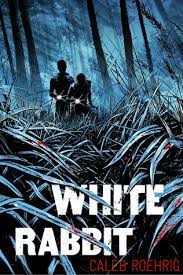 I give this book 4 stars (out of five). This is a very interesting murder mystery story, it’s the kind of story that pulls you in and you get so invested in the plot and characters that once you start reading you just have to keep reading until you finish it.

This story follows Rufus and his ex-boyfriend Sebastian as they are pulled into a very dangerous situation. While following a frantic call for help from Rufus’s half-sister April they drive over to where she is (her boyfriend’s lake house) and discover her in the middle of a crime scene, passed out next to her boyfriend’s (Fox’s) dead body. After helping her get back into a conscious and capable state of mind they ask her what happened, but April is adamant that she did not do it. They were having a small party with about 6-7 people and something had gone wrong. April manages to convince Rufus to help her prove she isn’t guilty by offering him a few thousand dollars (which he accepted because his family really needed the money).

After getting the best possible understanding of what happened from the crime scene and April they go around and try to talk to all the people that were there. While pretending they don’t know what’s happened and are just worried about April they try to get more information out of them. As they go around and talk to different people the story just keeps getting bigger, deeper and more confusing. They discover things like Fox’s house was also burned down and another party attendee was killed.

Eventually they have to go to the police to report the death and give their statements, even though they aren’t totally honest because then they’d have to admit to willingly trying to cover up a murder and not reporting it immediately. Afterwards Rufus is offered more and more to keep helping April, the suspect list grows while Sebastian and Rufus keep going around trying to get enough information to solve the mystery and clear April’s name.

[Extreme spoiler warning: Skip this paragraph to avoid them but there are minor spoilers throughout the rest of the review.]

They plan on ambushing a meeting with one of the suspects (Race) and another (Lia), however Rufus and Sebastian show up instead of Lia. But the exact same thing happened to them when a different suspect (Peyton) shows up at the meeting spot. She explains her side of the story and finally everything is starting to make sense, going off of her information; she is guilty but not of killing Fox. She accidentally burned down his house, and Race is the real killer but they both lied to try and cover for each other.

They believe her story until when trying to leave they stumble upon Race’s car and find his body in the trunk, Peyton is the real killer (she was tricking them before) and she has a gun. In the final action scene Rufus and Sebastian have to try and get away while Peyton is following them with a gun and planning on killing both of them after they help her stage Race’s death as a suicide. In the end, Sebastian gets shot but lives and Rufus has a final battle with Peyton. He wins by tricking her into trying to hit him with Race’s car but then quickly ducking out of the way and making her hit a tree. Since she wasn’t wearing a seatbelt she died in the crash. Rufus, Sebastian and Race all survived and Peyton (although dead) was revealed to be the real killer among them in the end.

I think it has a very good title in relation to the actual story because ‘White Rabbit’ is the name of the drug that was at the forefront of this story, being all over the crime scene and something that lots of prominent characters were either taking or dealing. There were lots of twists and turns where the main characters (Rufus and Sebastian) think various people could’ve done it as they discover more and more things and the story progresses. Until the final reveal it is nearly impossible to figure out who did it and it’s a very unexpected twist. There was also lots of good foreshadowing in multiple different places and scenes that make the final reveal and other twists make sense even if it was too hard to put it together without certain pieces of information.

It has a great climax and final action scenes where the characters and the readers are still trying to put together the mystery and figure out who they should be scared of. I really liked how intense it got, it shifted the attention off the actual killer and misdirected everyone only to flip the fake story on it’s head and reveal the truth. It also had a good and lighthearted ending despite all the brutal stuff that happened throughout.

I thought the set up was very well done with it being Rufus’s half-sister who’s in trouble (so someone he knows but isn’t very close with) and there was good use of character relationships and interactions to motivate actions. It had some very interesting family dynamics between Rufus and his mother and his half family.

I really liked the gay representation, inclusion and characters as well as the hidden relationship aspect that progressed throughout the story. At first Rufus didn’t want to talk to Sebastian at all after they broke up in a terrible and heartbreaking way, but throughout the night the feelings between them get harder and harder to ignore. It also showed how their feelings towards each other and history impacted their actions and how they treat each other. I didn’t feel like Rufus or Sebastian were just thrown in there to have some gay characters (which is really important in all forms of media), not only were they the main characters but their sexuality was only one aspect of their character and they felt all around well developed.

Overall I really liked this book and enjoyed the story, my favourite part was probably all the different shifts in suspicion and confusion as Rufus and Sebastian find different pieces of the puzzle and try to solve the mystery. And also how the relationships between characters are constantly changing, evolving and being tested. I would definitely recommend this to anyone who’s interested in reading a murder mystery with a compelling romance as well as killer action scenes.