Who I’m not By: Ted Staunton

Based on a true story, ‘Who I’m Not’ is the powerful tale of a boy with many names and a fluid identity, changing himself whenever he needs to to survive. When Danny finds himself caught in a bad position he decides to pretend to be a kid who disappeared a few years earlier. Surprisingly, his act works and he gets sent to live with the family. But not everyone believes him, and one cop is determined to prove Danny isn’t who he says he is. 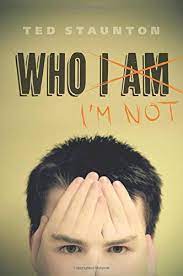 I give this book three stars (out of five). I really enjoyed reading this book, I thought it was very well written and entertaining and I especially loved the ending! It starts with the main character, named Danny.

He’s a young con artist who is caught when his boss/father figure is killed and he fakes being a missing child to get away, however he’s believed more than he expected and gets sent to meet up with their family. He’s a great con-man however and knows exactly how to act like the missing child, except for lacking blue eyes.

[Major spoiler warning for the rest of this review]

He stays with the family for a while bidding his time, but one certain cop suspects that he’s faking it and convinces him to try and talk to the family because he worked on the case when Danny went missing and he knows that Danny is actually dead. But the cop’s plan backfires and one of Danny’s family members ends up committing suicide and ‘Danny’ needs to out of there. But while impersonating Danny he fell in love with a girl in town, and now he has to find the courage to leave her and disappear back into another fake name and life, which is what he does.

The ending is just that he is anyone and everyone, he’s probably interacted with you randomly in public at some point, he has many, many different names and he is everywhere. Now, after the events of this story, everything he does and every name he uses has more significance, he is Adam now. I personally love the ending and probably didn’t explain it very well, but it’s great.