In this startling dystopian world, at age sixteen Rhine has only four more years to live. After wars destroyed the entire world except for North America and the ‘normal’ human race was wiped out, now everyone is born with a deadly virus. That kills women at age twenty and men at age twenty-five.

Everyone has been left to try and survive in this unrecognizable world, where crimes and poverty are rampant and no one can stop the virus. When Rhine is kidnapped, along with many other girls, and sold to be a wife she is determined to escape. But her husband Linden really loves her, and she finds it harder than she’d like to hate her life there. She doesn’t have much time, but where can she go when there’s no safe places left? 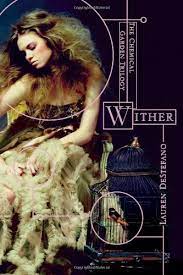 I give this book 3.5 stars (out of five). It was very interesting, engaging and well written. The world building was insane, it takes place many decades into the future. We don’t get an exact year but we know it’s after a major third-world-war that wiped out everything else besides North America. The entire natural human race has ended, died out, but an entire next few generations of prosthetic people live on.

They were invented to be humans but without cancer, it was the cure. But the next generation of fake people were sick with something worse than cancer that affects everyone. They all die mysteriously early from some type of virus, the women all die at 20 and the men at 25 and no one is quite sure what the cause is. The world has changed a lot.

The main character is a girl named Rhine who lives in what used to be Manhattan with her twin brother Rowan. They’re relatively normal sixteen year old orphans, fighting for survival in this weird future. Rhine has Heterochromia which means both of her eyes are different colours.

One day Rhine is trying to find work but instead she is kidnapped by people called Gathers. They take random girls from wherever they can find them and take them to become the brides of older, wealthy men. They’re taken, tons of girls in a giant van and all put in a line up. Rhine is one of the ‘lucky’ three girls to be picked to be a bride. All the many, many others are killed by the Gathers.

Rhine wakes up in a strange mansion and is married off to someone she hardly knows named Linden, along with her two sister wives. Afterwards she ends up living on one floor of the mansion with Jenna, who’s eighteen and Cecily, fourteen. Cecily is eager to be a bride and have Linden’s kids, as they’re all supposed. While Jenna resents him (the husband), especially because her sisters were also in that van.

Throughout the book Rhine falls in love with an attendant named Gabriel and attempts to run away a few times. Many things happen while she is there for almost a year, Cecily gets pregnant, gives birth, Jenna dies (not of old age, some characters are just evil) and Rhine and Gabriel successfully run away and steal a boat to get away.

I really liked this book, it’s the first book in a trilogy so I still need to see what happens next but I think it’s a great start. My favourite thing in this book is the world building, even having people searching for a cure and arguing that the human race isn’t worth saving and that we should all just let ourselves die out. I also loved how the author shows Rhine missing her brother, her parents and her old life. I really enjoyed this story, but it’s definitely a little mature and more for older teens.