You Too? Edited By: Janet Gurtler 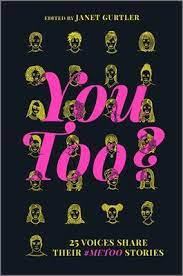 I give this book 4 stars (out of five). First of all, this is a very important topic and I’m very glad this book was created especially for the teen and young adult genre because it’s important for young people to be educated and aware of this subject.

Also although there isn’t a specific page set aside for it in the introduction section there is a clear trigger warning for the topics covered in the book including sexual harrassment, sexual assualt, rape, incest and exploitation. And there’s also helpful resources included at the end of the other content.

Something that often confuses me in many books is why they put the resources at the end of the book and not at the beginning but that’s just a general complaint from me, because so many books have it this way. I don’t really understand because if someone picked up the book and needed help they probably wouldn’t have time to read it all  to find the resources at the end. But that’s just my own opinion on the logic of the organization of the content.

Something that is really important about this is that it gives so many people a voice, and joins them together here in a good place for people to read them all and hear about many different experiences. This book is very inclusive, it isn’t limited to a certain type of person. This features authors of multiple different genders, sexualities, races, social statuses and locations. They all have the freedom to tell and share their stories no matter the differences. Because of the diversity amongst the authors all of these stories are different and some of them shed light on lesser known parts of the movement.

This book also really encourages everyone to listen and speak out because even if your experiences seem insignificant compared to what others went through, it’s still your truth and important to share. Many authors expressed not being sure if they should share their stories because they know worse things have happened, but that really is not the standard we should be setting or abiding to. We shouldn’t only talk about extreme cases of sexually motivated violence, because that normalizes the smaller acts and their long lasting impacts.

This book can be pretty hard to read at times, so I would definitely be aware of that going into it. Because there are many different submissions I’m only going to specifically discuss my favourite or most influential parts. But I do want to say that there are chapters that include things like abusive teachers, child abuse, cults and many more topics that aren’t always at the forefront of the #MeToo movement.

My only other note is that as a reader, I was pretty young when the #MeToo movement started in 2014/2015 I was still in elementary school. So I am quite literally part of the generation that grew up with this movement, so that impacts my personal impression of this book. I want to say that I have so much respect for women in the past few decades and throughout history who survived, because some of the things I’ve seen and read are so different from my own experiences and hopes for the future that I can’t imagine them as the everyday reality.

One of my personal favourites was Bus Stop Witchcraft By: Kenna Clifford. She acknowledges that she has privilege and tries to make room for a more open conversation, she discussed how even something as simple as getting on public transportation can be dangerous for female presenting people and the effects of the #MeToo movement. She also discussed how women who love women are often sexualized and portrayed as something to please men and she talks openly about how that affected her finding her own sexuality and coming to terms with that. Overall it was very empowering and encouraged people to raise their voices and not let themselves be silenced, and reminds us that we also have the means to fire back.

Bathsheba By: Mackenzi Lee actually blew my mind. It reveals the truth behind a classic bible story and I found it to be extremely educational. Apparently King David saw Bathsheba bathing on the roof and then initiated an affair with her and later organized her husband to be killed after she became pregnant with King David’s child. But as Mackenzi explains this is not how the story went, in actuality Bathsheba wasn’t bathing on a roof, in fact David was on a roof and when he saw her she probably wasn’t even bathing. He didn’t give her any choice, he took her and forced her into a sexual relationship with him. It was illegal to turn down a King so she had no choice and he later killed her husband just so he could be with her.

The author goes into detail about how this story can be extremely harmful especially to young girls who are taught to never distract or corrupt men by doing anything that could possibly tempt them. That message is absolute bullsh*t and should never have been taught or shared, especially not at Church by adults to children. This is why I think blind faith can be dangerous even in the realms of religion, because if children blindly believed everything they were told then they would’ve grown up believing that what they can do with their bodies is determined by the self control of the men around them. This story also explains how Mackenzi would retell this story so that children and young people know it’s wrong and that they’re not responsible for men’s actions.

Another story that was one of my favourites was Class Valedictorian By: Lulabel Seitz, this was written by the student who went off script in her valedictorian speech to talk about sexual violence within the school. This was captured on video and went somewhat viral and got a lot of attention in American media. It was very nice to be able to read her own thoughts and experiences to get more background knowledge to the widely known clip and also read how her speech would have ended without being cut off.

In “Burn” By: Saundra Mitchell there was one part that really stood out to me, she metaphorically compared herself and others to phoenixes, burning on the inside and then exploding. Stating “The world trembles before angry women, because angry women no longer tremble,” (pg. 214). The message is strongly empowering and let’s victims, survivors and people who aren’t defined by those terms be angry and explode when they need to and take back everything and more.

Boys will be Boys By: Eve Porinechak centers around the author’s middle school experience from violent boys to demeaning teachers and staff. The thing that stood out to me in particular in this story was her confronting her assailant years later and him not remembering her, he couldn’t even remember her specifically. The boys who hurt her both became fathers with young daughters and the author wonders if they are ever worried for their daughters’ safety when they’re around young boys. I was so mad when she shared her story of  a staff member telling her she was too pretty to be a doctor and instead wrote for her, “When I grow up I’d like to be a fashion model and marry a doctor!”

There is Strength in Our Voices By: Cheryl Rainfield stood out to me partly because of the extremity of her story and also because of her writing about her sexuality and pride. At a certain time she wrote, “I’m grateful I was able to find some queer music, books, and community to turn to as a teen.” And this reminded me of something I wanted to discuss at some point, as a member of Gen z and someone who is a queer teenager, I think the amount of inclusion and acceptance in mainstream and social media made a huge difference. When I was discovering myself I was able to easily find helpful resources and talk to adults and friends about it openly and I think that is a big contributor to how there’s “So much more gays nowadays.” Because as more and more people have access to media showing that they aren’t wrong or invalid if they aren’t straight or cisgender, it makes it a lot easier for people to discover and accept themselves even at young ages.

My Oklahoma History By: Andrea L. Rogers gave a unique perspective and story, telling a bit about Cherokee history and how the author was hurt in her classroom and her teacher didn’t intervene or help. As an adult the author is now a teacher and she writes about how she feels it is her responsibility to check in with her students and make sure they’re doing okay, and she wishes her high school teacher felt the same.

In Mischa Thrace’s No Right Way to Be Wronged they talk about there is no right way to respond to a traumatic event or to be hurt, there is no right way to be a victim or to be a survivor or just to be a person. There’s no correct way because everyone is different and will want to do different things. Mischa discusses how in one of her books My Whole Truth the main character Seelie experiences sexual assault and keeps it a secret. It received a lot of negative reviews because Seelie didn’t fit their image of a victim/survivor and because she wasn’t vocal enough about what happened to her. Mischa emphasizes in her writing that while it is good and important to speak out, share your stories and listen, silence isn’t forever and it’s okay if it is.

Overall this book covered a very important topic well and shed light on many different people’s experiences. I would definitely recommend this to everyone but specifically to young adults and teenagers so we can have a better understanding of this issue.