Your Constant Star By: Brenda Hasiuk

Faye can not be more surprised when her childhood best friend suddenly shows up back in town. Bev is very different now but at least she’s here, so Faye goes along with her plan. Bev is pregnant and needs help finding adoptive parents and Faye helps her through the process. But Mannie, the father of her child, does not agree with the decision to adopt and has an agenda of his own. A series of interesting decisions sends these three down a dangerous path to adulthood. 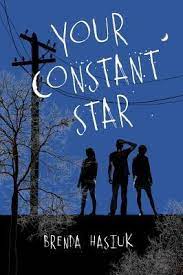 I give this book two stars (out of five). This book is generally good. I personally didn’t really like the story, it’s unsatisfying but that is kind of the whole point. The main characters are Faye, the “good” adopted Chinese daughter, Bev the wild child and Mannie, an unambitious stoner.

Bev and Faye used to be neighbors but Bev moved away when they were eight, randomly Bev comes back into town and asks to meet up with Faye. Bev is pregnant with Mannie’s kid and wants Faye to come with her when she interviews people to pick adoptive parents. She picks parents, has the kid and the adoption process goes on. But Mannie wants to keep his child and is upset about not being included in the decision.

[Spoiler warning, skip the next paragraph to avoid them]

In the end, Bev pins Faye and Mannie against each other and manipulates them, leaving them both in the hospital after a car crash. She lets Mannie go to prison for something that isn’t his fault while she’s already gone (moved back in with her mom).

After reading this I’m very annoyed that Bev got away with that and Mannie and Faye just have to deal with what she did, when she’s the one who took advantage of both of them to get what she wanted. I always get emotionally attached to the characters as I read and this storyline just frustrated me, because there were no real consequences for Bev. But regardless the story is still well written and I don’t regret reading it.